Can the cool, new Suzuki Jimny kick dirt in the face of the practical and great-value Dacia Duster? 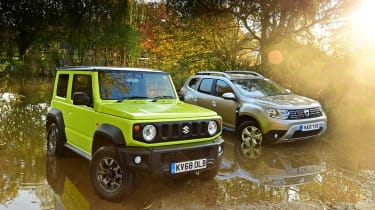 Think of an SUV in 2019 and the cars that spring to mind will be spacious family models with bold styling and limited off-road ability. Over the past 10 years the market has shifted in this direction, but before that SUVs earned their keep – and the Suzuki Jimny was a great example.

It’s now time for an update of one of the smallest off-roaders around, and while Suzuki has made it more visually appealing, the new Jimny hasn’t forgotten its off-road heritage.

Can it compete with Dacia’s Duster as a rugged and affordable small SUV? Updated last year, the Duster is offered with four-wheel drive, but this test isn’t all about all-terrain ability. The winner must match that with on-road manners and practicality. 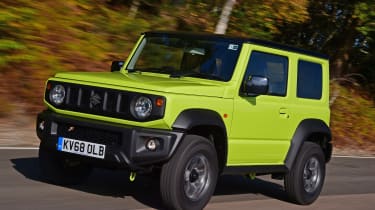 For: Brilliant off road, charming looks inside and out, well equipped as standard, great gearbox.Against: Poor on-road handling and ride quality, cramped interior, pricier and less practical than Duster.

The bold styling gives the Suzuki Jimny an individual personality, and this is reflected in the driving experience. The ladder frame chassis is an old-fashioned way of building a car, because most modern motors use a monocoque design to maximise handling, comfort and safety. But for off-roading, a construction like this allows for a stronger basis for the rigid-axle suspension.

This set-up is useful when you want one wheel to be pushed down while the other goes up, boosting traction over bumps and ruts in rough terrain. However, it means it’s not as comfortable on road.

The Suzuki also has a low-range box to make the most of its torque at low speed, and has an electronic limited-slip system that uses the brakes on spinning wheels to allow the other wheels to regain traction. 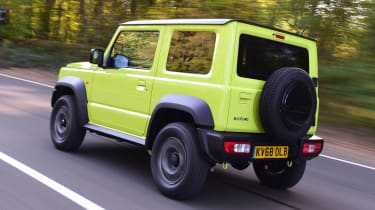 There’s absolutely no doubt that the Jimny is the better off-roader. It feels tough, as if the little Suzuki could take on pretty much anything you throw at it. It’s also great fun to drive off road.

All of those aspects enhance its appeal as a road car, but this focused nature means the Jimny can’t compete with the Duster as an all-rounder. The steering has more feel than the Dacia’s, but because there isn’t a huge amount of grip and the steering is slow, it often requires more effort than you’d expect. Plenty of lock means parking is nice and easy, though.

Ride comfort isn’t a strong point for the Suzuki, and it’s not as smooth as the Duster on the road, but the Jimny isn’t awful in this area. It fidgets a little on faster roads and it bounces out of potholes, although the seats are comfy enough. Refinement isn’t great, either, because the engine is noisy and the chunky tyres generate quite a bit of roar. 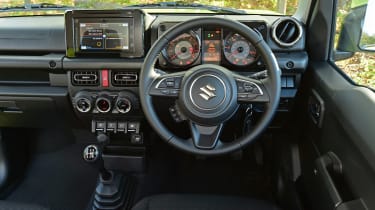 The 1.5-litre engine is new, and it’s smoother and more responsive than the 1.6-litre unit in the Dacia. It’s not a strong performer overall, although it did beat the Duster from 0-60mph in our tests, taking 11.4 seconds. At higher speeds the five-speed gearbox held the Suzuki back, because it has one fewer ratio to make use of, even if it is lighter.

While the Jimny’s interior is utilitarian, it has an attractive design and the materials are tougher than those in the Dacia. Although the Duster’s dashboard looks as though it’s been taken from a 10-year-old car, the Suzuki’s feels like it’s built for a purpose and features extra protection in key areas such as on the backs of the rear seats.

The Jimny is well equipped, and this SZ5 has metallic paint as standard, along with sat-nav, 15-inch alloys, AEB and smartphone connectivity. The Duster misses out on the latter, but does get sat-nav and a reversing camera in Comfort trim. 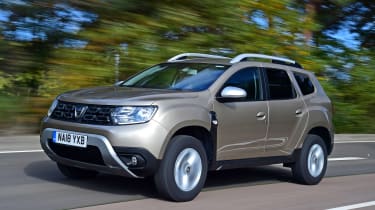 For: Great value for money, very practical interior, better on the road than its competitor here.Against: Noisy engine, gearbox is unpleasant to use, poor infotainment, not as good off road.

This latest version of the Dacia Duster arrived in showrooms in summer 2018, and although it’s a new model, the affordable SUV uses the same platform as its predecessor and even the same 1.6-litre SCe petrol engine.

The non-turbo unit isn’t a strong point; it’s fairly noisy and needs to be revved to access what little performance it offers. That’s true of the Suzuki’s 1.5-litre engine as well, but at least in the Jimny you can enjoy the sweet shift. In the Dacia gearchanges are unpleasant because the box is vague and rubbery.

In our performance tests at the track, the Duster took 12.1 seconds to go from 0-60mph, which was 0.7 seconds slower than the less powerful but lighter Jimny, highlighting why the budget SUV feels a little bit more gutless here. 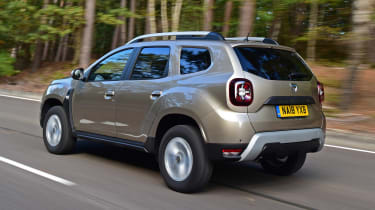 Neither car is designed for performance, but the extra grunt in the Dacia – it has a maximum of 156Nm of torque, while the Jimny offers 130Nm – means it’s easier to get up to speed on a main road or motorway. Once you’re up to speed, the Duster is also more refined than the Suzuki, keeping more wind and road noise out. However, neither of these models is particularly quiet.

Thanks to its more complex suspension set-up (MacPherson struts at the front and a multi-link rear axle), the Duster rides more fluidly than the Jimny. It’s acceptably comfortable on rough roads and easily trumps its rival here, although this still isn’t the Dacia’s key strength; deep potholes can upset its composure. 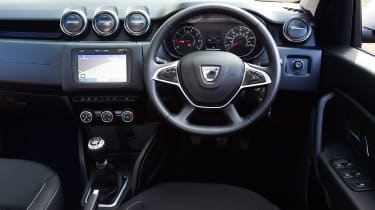 The Duster’s faster steering doesn’t have as much feel as the Jimny’s, but the new electronically-assisted set-up is light and doesn’t kick back like before, so it’s easier to drive. The Dacia also has quite a bit more grip in corners, so you needn’t slow right down for every turn as you do in the Suzuki.

While the Duster isn’t a winner when it comes to driving, it does score well as a family car, or even as a motor for carrying anything. Its boot is bigger with all the seats in place than the Jimny’s is with the rear seats folded, for example.

But while there’s a lot of space inside, the interior is drab. The materials look and feel cheap. The Suzuki masks that with a quirky design, while the Dacia’s dashboard is dull. 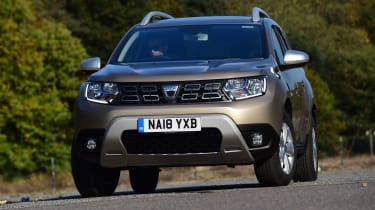 The Duster isn’t just cheaper than its rival here, it’s also more comfortable on the road, much more practical and has space for a whole family. It’s well equipped considering its low price and better to drive on the tarmac than the Jimny. But as an off-roader, it does lose out to the Suzuki. 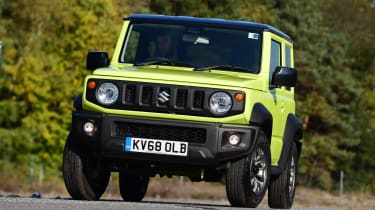 Few people will buy a Jimny with their head, because it’s uncompetitive with almost any rival, but many will buy with their heart. If you’re looking for a serious but tiny off-roader, this charming and quirky car is great. It’s just not a very practical family car, nor is it that comfortable or good to drive.