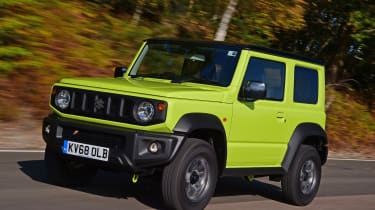 Judge the new Suzuki Jimny as a 4x4 workhorse to be used over the roughest terrain without complaint and it’s a five-star car. However, its on-road manners are less complete and it’s not especially practical either. Balance that with its value and cheeky style and it becomes a head versus heart decision. It may be flawed, but it’s tremendous fun.

Every now and again, a car comes along brimmed so full of character its imperfections can easily be forgotten. The new Suzuki Jimny is one of those cars.

Previous Jimnys have been somewhat unremarkable. But by giving the world a retro-inspired baby 4x4 at a time when we’re still waiting for the Daddy of all 4x4s (the Land Rover Defender) to be replaced, those clever folk at Suzuki have produced a car that’s destined for cult status.

The upright, squared-off style – combined with bold circular LED headlights and a five-slot grille – fits the ‘cute off-roader’ brief perfectly. Ask a five-year-old to draw you a 4x4 and they’ll draw you a Jimny. They’ll probably colour it in our car’s high-visibility Kinetic Yellow hue, too. 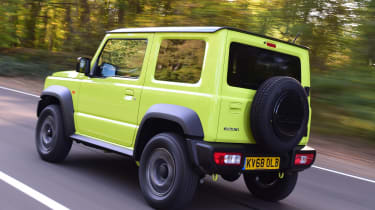 The inside follows the same hard-working theme. Everything is chunky and easy to use – even with gloves on. It’s not as basic as before, though, with a seven-inch touchscreen complete with navigation and full smartphone connectivity, climate control and even heated seats. Prices haven’t been revealed, but top-spec cars like this are expected to cost around £18,000. That’s not half bad.

Even the driving position is reminiscent of the Defender – you sit upright with elbows tucked in to avoid banging your right arm on the door. But stick a Jimny next to a recent Land Rover  and you’ll realise just how tiny it is. It’s supermini-sized in footprint, if not in height.

It’s also pretty old school under the skin. It sits on a ladder-frame chassis more suited to off-roading than the school run, with suspension and ground clearances at home on building sites rather than high streets. It has the novelty of a low-ratio gearbox usually only found in much pricier, serious off-roaders, too. We love it. But it’s not without its flaws. 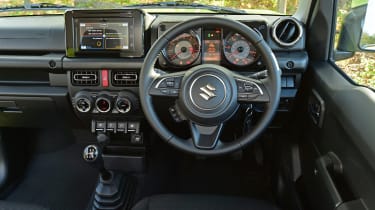 Let’s start with the driving experience. It’s actually surprisingly civil – running most of the time in two-wheel drive mode. It’s a bit bouncier than your usual SUV on Tarmac, and the body roll will temper your speeds through corners.

Yet no similarly priced car will go further off the beaten track. By selecting the full-time four-wheel-drive setting or the lower range gears, the Jimny readies itself for more serious inclines and surfaces. There are electronics like Hill Descent Control to keep you going, too.

The manual gearbox is vague to use and there are only five speeds, which means the engine is spinning at around 3,000rpm at just 60mph; this isn’t a natural cruiser. The 100bhp 1.5-litre engine is eager from the moment you turn the key, however, and although Suzuki doesn’t publish a 0-62mph-time, we’d guess it’s around 12 or 13 seconds. Suzuki does claim an average of 41.5mpg, though, which was tallied well with our test figures.

Then there’s the steering. Again, it’s better suited to off-roading, which means lots of arm twirling to keep it pointing where you want when driving around town. As such, manoeuvring and parking aren’t the easiest tasks.

There was further bad news from crash testers Euro NCAP, which gave the Jimny a poor three-star rating, in spite of its six airbags and electronic features like Lane Departure Warning.

The three-door bodystyle doesn’t lend itself well to practicality, either. The side-hinged rear door and eighties-style spare wheel hanging on the back only adds to the compromises, and there’s next to no boot room with the rear seats up.

They fold easily to reveal 830 litres of space, however, and the backs have a handy wipe-clean surface. If you can clamber up into the back seats, headroom is good, though knee room is a little tight.