First report: Suzuki Jimny makes a good impression as we start to learn why it has a two-year waiting list 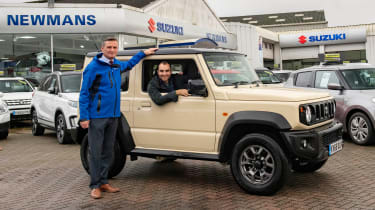 Say hello to Auto Express’s most beige fleet model ever. The new Suzuki Jimny arrives just in time for winter and we can’t wait to discover why this car now has a two-year waiting list.

The Suzuki Jimny is one of those cars that doesn’t come along very often. It’s amusingly old-fashioned in an unashamed kind of way, unapologetic about its shortcomings, truculent and likes to get muddy. Apart from the last point, we go hand-in-hand together and that’s why I’ll be running this delightfully beige example for the next six months.

And it really is beige. Suzuki calls it ‘Chiffon Ivory Pearl Metallic,’ while the roof is finished in ‘Blueish Black’, which seems rather fancy for what is, let’s face it, a car that’s anything but fancy. You can even have a shade called ‘Brisk Blue’, for heaven’s sake.

While the Jimny is brand new, it comes from a different time. It replaces the last Jimny, which was on sale for more than 20 years, and a car that was loved by country folk. You still see them in my area running around between villages, carrying several dogs, caked in mud and battered beyond belief. While Land Rover Defenders are for show-offs, the Jimny is the true workhorse because it’s just so tough and unassuming.

On first impressions, the new Jimny forgets about its predecessor’s character and tries to go all trendy. The old car’s slightly gawky styling has made way for a retro boxy appearance that makes it look like a Defender or Mercedes G-Class on a diet. I think it’s a bit comedic and, what with those paint shade names, it’s maybe too obsessed with the way it looks, as cute as it is. 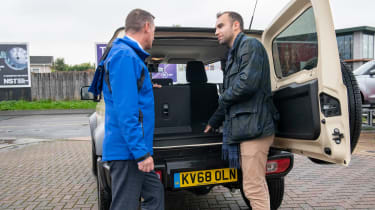 But it really hasn’t forgotten its roots, for the new Jimny, like the old one, laughs in the face of hatchback-based SUVs that claim to fit into your Instagrammable active lifestyle. It uses a proper, sturdy ladder chassis, there’s tough suspension that gives impressive axle articulation and switchable four-wheel drive (2H – two-wheel drive, 4H – four-wheel drive high, and 4L – four-wheel drive low).

Those dainty dimensions and cheeky looks have brought in a raft of new customers, says Newmans Suzuki’s sales manager, Barry Fagan. Based in Totton, near Southampton in Hampshire, and just a stone’s throw away from the New Forest, Newmans is very familiar with traditional Jimny buyers. But, while the old car sold in very few numbers, the new one has been considerably popular with those who have fallen for the Jimny’s retro must-have appeal.

So popular, in fact, that Barry tells me there’s now a solid two-year waiting list for one. Moreover, customers from all round the country ring the dealership asking if they’ve got one in stock. If they do have one it isn’t around for long, with many Jimny lovers taking whatever colour happens to be on Newmans’ forecourt. 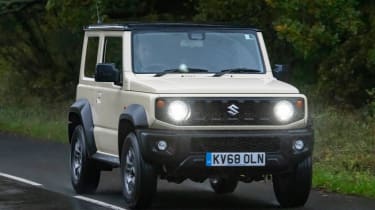 It’s for this reason we aren’t running a brand-new Jimny. Our 68-reg car already has a little under 3,000 miles on the clock, but I was lucky enough to choose the colour. We could have had any shade we wanted – white, silver, black, blue and the Jimny’s eye-searing ‘Kinetic Yellow’ launch colour – but I chose the beige with a black roof.

I think it lends the Japanese 4x4 a rather cool air without being too shouty, but it has divided opinion in the office. And with some miles already under its belt, the car is nicely run in, meaning I can get on and enjoy living with the Jimny.

I’ve put around 500 miles on it already and quickly learnt you’ve got to treat the Jimny sympathetically. Its sheer smallness helps in central London and the four-wheel-drive traction certainly helps where I live in the Hampshire countryside, but between these points are dual carriageways and motorways. The little Suzuki hates them – so much in fact I have devised new routes that take in muddy fields and byways. It’s super fun.