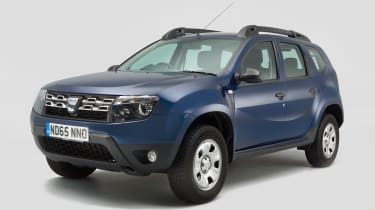 Since landing in dealers, around 27,000 Dacia Dusters have been sold, and it still makes waves in the compact SUV sector. It’s notched up plenty of accolades, including Carbuyer’s Best Small SUV crown (twice), plus it won the Special Award at our Tow Car of the Year awards in 2014 for offering strong 4x4 towing ability at a great price. By keeping things relatively low-tech, Dacia has ensured the Duster has a decent reliability record, and build quality is also better than expected. Some early cars could suffer rust issues, but newer models should minimise the chances of problems later on.

Few people would have predicted just how popular the Dacia brand would become when it returned to the UK in late 2012.

The first model to come from this Renault sub-brand was the Duster, and it’s fair to say that it ruffled more than a few feathers when it arrived. With a starting price of just £8,995, the Duster was marketed as being ‘shockingly affordable’; an extra £2,000 bought a four-wheel-drive edition.

Many assumed that cheap must also mean nasty, but as our annual Driver Power satisfaction survey has shown, that couldn’t be further from the truth, with the Duster proving more highly rated by owners than premium models like the current BMW 3 Series or Mercedes A-Class. 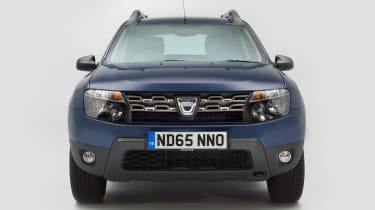 The Dacia Duster is still in its first generation, and has been on sale for four years.

The first UK Dusters were delivered in January 2013. At launch, there were Access, Ambiance and Laureate trims; the 1.6-litre petrol came in entry-level form while the 1.5 dCi was offered with the top two trims only. Both engines were offered with front or four-wheel drive. A refresh in September 2014 brought design adjustments, new alloy wheels and extra colour options. 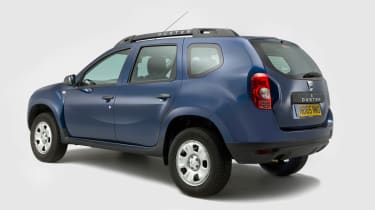 In June 2016, a 1.2 TCe petrol engine joined the line-up, along with a new range-topping Prestige trim. And more recently, a dual-clutch transmission was introduced as an option with the 1.5-litre dCi engine.

There are relatively few four-wheel-drive Dusters to choose from, thanks to the premium over a front-wheel-drive edition. All cars come with remote central locking, ESP, electric windows and rear wash/wipe. 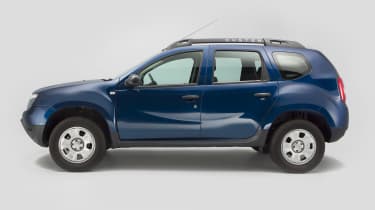 Alternatives to the Dacia Duster

There are plenty of compact SUVs that, on paper, are up against the Duster. They’re all more costly, though, so for a given budget, you’d get an older, higher-mileage car.

Perhaps the key rival is the Nissan Qashqai, which is distantly related to the Dacia. Plentiful, practical and very capable, the Nissan is a supremely accomplished car.

The Kia Sportage and Hyundai ix35 are impressive, too, as they’re excellent value, reliable and spacious. Don’t overlook the Ford Kuga, either; it’s great to drive, and you get plenty for your money. The Honda CR-V and Toyota RAV4 major on reliability, plus there are lots to choose from, but prices are significantly higher.

Check for waterlogged front footwells on early cars as they can leak. A poorly sealed bulkhead or badly fitted door seals are usually the culprits. 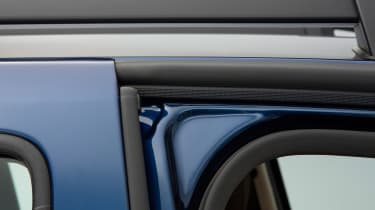 The 20-inch factory-fitted wiper blades aren’t as effective as they should be; swapping to Lucas or Bosch 21-inch items makes a big difference.

Corrosion can be an issue on some cars, so check under the window seals, panel edges and also as many bolt holes and seams as you can.

Generally, the interior trim seems to hold up pretty well, but seats can squeak and trim panels can rattle.  Seatbelts can buzz sometimes, too.

The steering wheel is adjustable for rake but not reach, while there’s height adjustment for the driver’s seat on Ambiance and Laureate editions only. Low-spec editions are spartan, but posher models feel more plush. Cabin and boot space are good, though, so it’s practicality over luxury. 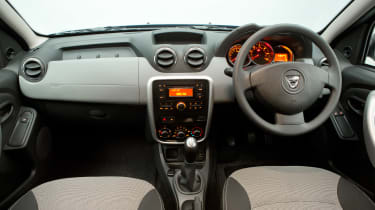 All Dusters need to be serviced every 12 months or 12,000 miles. Check-ups alternate between minor and major, priced at £159 and £289 respectively. The brake fluid needs to be changed every four years (at £45), while fresh coolant (£79) is required every five years.

The 1.6-litre petrol and 1.5 dCi diesel engines are fitted with a cambelt that should be replaced every six years or 72,000 miles; dealers charge £399. All Dusters come with a three-year/60,000-mile warranty which can be extended to five or seven years/100,000 miles.

Since the Dacia brand was relaunched in the UK at the end of 2012, owner Renault has launched 11 recalls for models manufactured during this period. That’s across its whole passenger car range, while its commercial vehicles have also been subject to some callbacks. 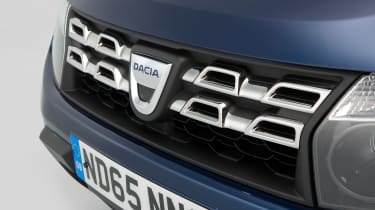 But Dacia has yet to issue any recalls for the Duster, Sandero or Logan MCV. This is despite the fact Dacias use older Renault tech to keep costs down. It’s a formula that works as it improves the ownership experience, too.