Dacia's tough Duster SUV gets the option of a dual-clutch auto for the first time, but what's it like on the road? 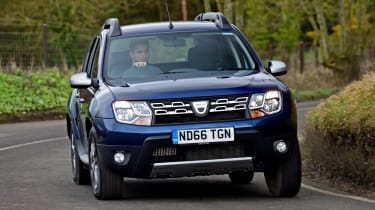 Adding an automatic gearbox might detract slightly from the Duster’s no frills appeal, but it’s a welcome addition to the range. You can’t argue with the bargain list price, while mid-life updates applied to the crossover last year add a handy dose of extra kit. If you want an honest, economical and cheap-to-buy SUV – the Dacia remains a solid choice.

Four years after it launched in the UK, Dacia can still lay claim to the title of Britain’s cheapest car. We recently reviewed the facelifted Sandero, but now the Romanian car maker has fitted its bargain SUV with an automatic gearbox for the first time.

Apparently, 27 per cent of small SUVs sold in the UK are ordered with an auto box – and Dacia bosses tell us that the need for a self-shifter is the single biggest request dealt with by the brand’s customer relations team. This new dual-clutch setup in the Duster couldn’t come soon enough, then. 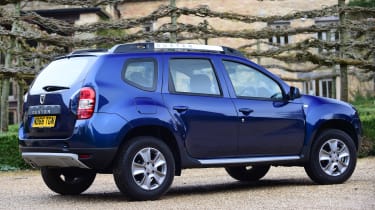 We first drove the updated car in Croatia last year, and came away impressed by the smooth-shifting auto. It commands a £1,000 premium over the equivalent six-speed manual and is exclusively available on the two-wheel drive 1.5-litre dCi diesel. The EDC auto only comes on the top Laureate and Prestige trim levels, and while that means prices start from a lofty £14,995, it’s still considerably less than an equivalent Suzuki Vitara. It even undercuts the SsangYong Tivoli diesel auto by more than £2,000.

It’s a decent fit, too. It’s the same gearbox fitted to the Renault Megane and Kadjar, shifting without issue under gentle acceleration. Hitting the throttle with too much haste when pulling out of tight junctions can cause the car to lurch forward, but you quickly get used to it. As with any Duster, a measured driving style works much better here. 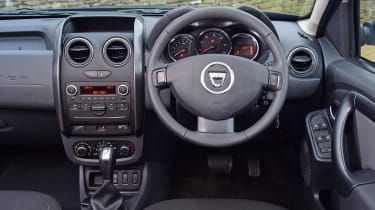 It’s all about ease of use, really. The Duster has never been a car you particularly want to drive fast, and the vague steering and soft body control remain unchanged in this automatic model. There are no steering wheel-mounted paddles either, so if you want to take control, it’s via the conventional lever on the centre console.

It’s a shame that Dacia has no plans to offer the new ‘box on the TCe turbo petrol, as the gruff dCi diesel isn’t the most refined unit. It’s noisy when revved, and the rudimentary cabin does little to disguise engine rattle at idle. Still, it’s punchy enough, and there’s plenty of in-gear shove for a car of this type. 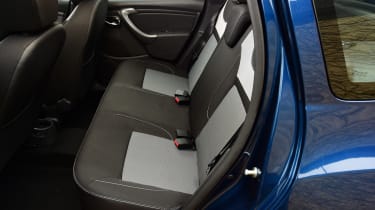 Those opting for the dual-clutch Duster shouldn’t suffer too much when it comes to running costs. The manual model will do 64.2mpg, while Dacia says this EDC version should return 62.8mpg. In the real world, you’re unlikely to see much difference driving the two back-to-back. CO2 emissions of 116g/km play 115g/km in the manual, putting them in the same BiK tax band for company car drivers, too.

This Laureate is well equipped, with 16-inch alloy wheels and LED daytime running lights. Inside there’s air-con, electric windows all round and a DAB radio with Bluetooth connectivity. For £900 more you can opt for the flagship Prestige version, which adds a touchscreen sat-nav and a reversing camera.