The facelifted Dacia Sandero Stepway offers space, comfort and low prices, but how does it drive? 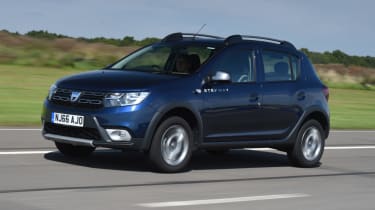 The Sandero Stepway retains its place as the classier entry in the Sandero range, thanks to its crossover-inspired looks, comfortable ride and respectable levels of kit. It’s still not great to drive, but the £8,995 starting price still makes it an enticing option. Unfortunately, for many prospective buyers, the PCP monthly repayments take a bit of shine off the perceived value.

Dacia’s Stepway range is one of the budget brand’s biggest success stories. Around 60 per cent of Sandero sales are accounted for by the more rugged, taller version of the firm’s supermini – and now, in line with facelifts across the entire Dacia line-up, it’s had a bit of a revamp.

The styling changes include revised headlights and tail-lights, a new front grille and a different front bumper. Inside the cabin, smarter materials, chrome-effect trim and a new steering wheel freshen things up. 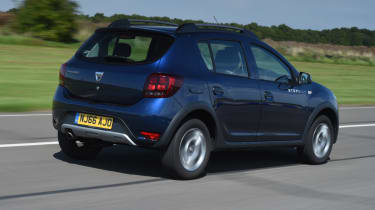 The Stepway has a slightly raised ride height over the Sandero, along with black plastic cladding, faux-aluminium skid plates, and roof rails. Under the skin, it’s still a front-wheel-drive supermini.

The Stepway isn’t available in the Sandero’s entry-level Access trim, so you’ll have to plump for a pricier but better-equipped mid-spec Ambiance car (as driven here) or a range-topping Laureate model.

Ambiance is still pretty basic, but it’s also cheap, starting at £8,995. The manual rear windows and manually adjustable mirrors hint at the car’s budget status, but it does have electric front windows, a DAB radio with Bluetooth, air-con, a leather gearknob, hill start assist and tinted windows. There are also LED daytime running lights.

On the road, the steering is decidedly heavy at low speeds, the gearbox has a notchy shift and when you up the pace there’s plenty of body roll. The jacked-up suspension means that even bigger bumps are soaked up well, though, and the soft seats are pretty comfortable. 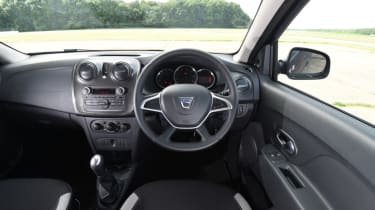 The 89bhp 0.9-litre three-cylinder petrol engine feels strong enough around town, but it quickly runs out of steam once you venture beyond its comfort zone, so everything is a little more strained on the motorway. You could negate this by going for the fuel-efficient 89bhp diesel model, which has far deeper reserves of torque, but it costs a hefty £1,500 more.

That sub-£9,000 list price means the Sandero Stepway still represents decent value. However, steep 7.9 per cent APR rates on PCP deals mean that you’ll have to cough up a hefty deposit of £2,370 if you want to pay less than £100 per month.