Is the new range-topping Dacia Sandero Stepway Techroad worth the extra cash? 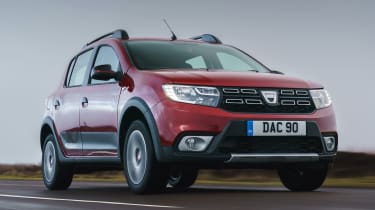 Taken as cheap, honest and decently equipped family transport, the Sandero Stepway is cheery and hugely affordable. The Techroad model adds a bit of extra style, and certainly stands out from the rest of the range. But in terms of kit, it only gets a reversing camera over the Comfort model, so your extra £660 goes on cosmetics. If you like that, this is probably the model for you.

Buy a new Dacia Sandero before the end of the year and you’re likely to have a long, hard think about picking up this one. That’s because this new range-topping Techroad trim level – available on the new Duster, and Stepway versions of the Logan estate and Sandero supermini – is only around until the end of 2019.

The new Techroad cars attempt to inject a bit of extra style, kit and desirability into Dacia’s refreshingly humble offerings. In the case of the Sandero Stepway Techroad, it’s the most expensive version of Britain’s cheapest car. Sounds fun, right?

• The cheapest new cars on sale

For £11,660, it’s essentially all-inclusive, except for some extra paint choices, European mapping and a spare wheel. 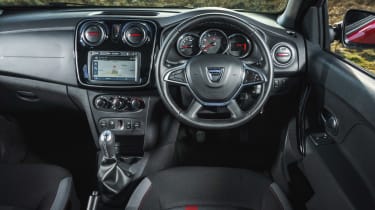 What you do get is air-con, rear parking sensors, cruise control with a speed limiter and a seven-inch touchscreen infotainment system with sat-nav and smartphone-mirroring software, such as Apple CarPlay – all for a little over £4,000 less than the cost of a bog-standard Ford Fiesta Zetec.

The Stepway’s otherwise-humdrum appearance is lifted by some colourful new appointments, but overall it remains no more than the sum of its parts. What you see is what you get, but £11,660 is still a very small amount for a new car these days, and it’s dirt cheap on a monthly deal, too, despite APR of 6.9 per cent.

Inside, the car feels every bit its price, although this is hardly a revelation or a criticism. To drive, the Dacia can’t shake its ageing underpinnings, either. The platform is a reworked version of the Mk2 Renault Clio chassis, and it’s not as fluent or comfortable as other modern superminis, despite raised suspension and bigger tyres.

The 0.9-litre petrol engine, while claiming more than 40mpg on WLTP, is boosty and whiny, and the controls, such as the notchy, long gearshift and steering, do little to defy the Sandero’s age under the metal – although driving thrills are really not what this car has been developed for.