We drive the rugged new Dacia Sandero Stepway, ahead of its arrival in UK showrooms in May 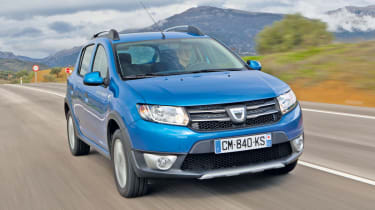 The Stepway is a cleverly judged model, tapping into the trend for crossovers and sticking with Dacia’s budget price policy. It’s even better to drive than the Sandero, too, thanks to a raised ride height and extra suspension travel. But while entry-level versions are good value, once you start adding extras it makes more sense to look elsewhere.

Not content with having just one crossover in its UK model line-up, Dacia has tweaked the Sandero supermini to create the rugged Stepway.

The Stepway is due to arrive here in May, a few months after the Sandero and Duster, and follows a tried-and-tested path for turning cars into crossovers.

The ride height is raised by 40mm, plus there are front and rear scuff plates, black cladding around the wheelarches and new roof bars... and that’s it.

Yet the result is quite different to the standard car. It’s easier to climb in and out, which might appeal to older buyers, and the view of the road ahead is better.

The trade-off for cranking up the suspension in the Stepway is even more body roll than in the standard Sandero – which is saying something considering its sloppy body control. Take things easy, though, and its road manners are entirely acceptable.

That’s especially true if you order the 89bhp 1.5 dCi engine fitted to our test car. It might cost £1,000 more than the 900cc TCe three-cylinder engine, and isn’t as fun to drive, but its smooth, torquey power delivery is perfect for making unruffled progress around town or if you want to stretch its legs on the motorway.

Not counting the roof bars, practicality is on a par with the Sandero. That means a 321-litre boot, which grows to 1,200 litres with the 60:40 split-folding rear seats taken down. Plus, there’s room for three adults in the back without too much of a crush.

And then there’s price, which is clearly the most important factor for anyone in the market for a Dacia. While the regular Sandero is the UK’s cheapest car, starting at just £5,995, the Stepway kicks off at £7,995.

But then it is pitched as a higher-spec car altogether, with buyers only offered the top two engines (the Sandero gets an entry-level 74bhp 1.2 as well) and top two trim levels. So there’s no basic version of the Stepway without a stereo or electric windows.

Even the cheapest 900cc TCe Ambiance model comes equipped with electric windows, a CD stereo and front foglights, while the top-spec Laureate gets air-conditioning, sat-nav and parking sensors. You can even specify leather seats in your Stepway for another £600.