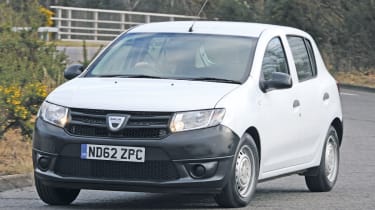 The Sandero Access is roomy and decent enough to drive. It’s cheap to run and insure, and residuals are good due to the low price. It costs the same as a solid used supermini, but includes a three-year warranty, and there’s not much kit to go wrong. In entry-level trim it’s too basic for UK tastes, though. We’d upgrade to the mid-spec Ambiance for £600 extra, and get body-coloured bumpers, Bluetooth, central locking and electric windows.

For less than the price of a Bang & Olufsen sound system in a new Audi A6 you can have a brand new car. The Dacia Sandero Access is Britain’s cheapest new model, at just £5,995 – that’s £2,100 less than the entry-level VW up! and £5,630 cheaper than the base version of the new Renault Clio, with which this Sandero shares its 74bhp 1.2-litre petrol engine.

Unfortunately for the Dacia, cheap isn’t exactly beautiful. Our entry-level Access is available only in white, with 15-inch steel wheels and unpainted, shiny black plastic front and rear bumpers. It’s a look that’s more small van than stylish supermini, although the more expensive Sanderos – with body-coloured bumpers and alloys – look much smarter.

Lifting the tailgate reveals a decent-sized, 320-litre boot – 44 litres larger than the Ford Fiesta’s. The rear seatbases fold forward easily in one, while the seatbacks fold forwards in a 60:40 split to free up a 1,200-litre load area, although the boot floor isn’t flat. Still, all Sanderos are five-doors, and offer decent head, shoulder and legroom for rear seat passengers.

Up front, the driver’s seat doesn’t adjust for height and the steering wheel is fixed, which compromises the driving position, but visibility is good, once you’ve moved the door mirrors manually.

The windows also operate manually, and the lack of central locking wouldn’t be an issue if you could push the lock down on the rear doors when they’re open – instead you have to shut the door and then lock it from the inside.

The dash is made from pretty hard plastic. It feels decently put together, but looks as though it would show scratches clearly.

There are plenty of blanking panels to cover where switches are located on plusher models, and you have to make do without a light in the glovebox or a vanity mirror. However, our model did have a £250 aftermarket radio – the car only comes with pre-wiring as standard. There’s lots of space up front, including useful cubby storage and a big glovebox.

The 1.2-litre engine has been around in Renaults for years. In the Sandero it’s rather noisy at almost any speed. The car weighs 941kg, and is quite low-geared, so it’s comfortable enough when keeping up with traffic or plodding around town at 25mph.

A little gearshift light on the rev counter tells you when to shift up or down through the notchy five-speed box – you’ll want to change up just to hush the engine. The power-assisted steering is quite heavy, and the pedals spongy.

Body roll is an issue, even at low speed, and the ride is lumpy and inconsistent. But at this price, you hardly expect a sports car – instead, the Sandero is little more than capable A to B transport.