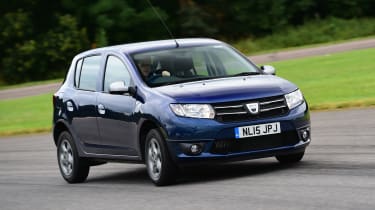 The Dacia Sandero remains a lot of car for the money, even in this new Laureate Prime trim. It’s practical, sensibly laid out and surprisingly comfortable inside, too. But it’s starting to feel old now, and the Laureate Prime edition inflates the price more than necessary. Still, there’s no escaping its budget intentions, and the mid-spec Ambiance trim makes plenty of sense.

Dacia is marking the 10th anniversary of its European rebirth this year with special Laureate Prime editions of its three models. We tried the smallest of the trio – the Sandero – which, in entry-level Access spec, is Britain’s cheapest new car.

Even in regular top-spec Laureate trim, the car comes in at well under £10,000 and offers kit that no supermini (and most city cars) at this price can beat. Electric windows, climate control, cruise control and a leather steering wheel are all standard, while paying £500 more for this Laureate Prime edition gets you blue cabin highlights on the seats, seatbelts and doors, as well as Cosmos blue metallic paint and silver door mirrors.

The problem is no amount of tech and colour add-ons can disguise the fact that this is a budget car, with rough plastics, dated switchgear and cheap-feeling touch points. At least there’s decent space in the rear and a 320-litre boot that expands to 1,200 litres with the seats folded.

Our 900cc TCe turbo petrol model is the pick of the line-up, with enough mid-range punch for overtaking. Fuel economy is adequate enough, and it’s quite a refined engine, too. It’s a shame, then, that the lack of soundproofing means there’s lots of wind and road noise. 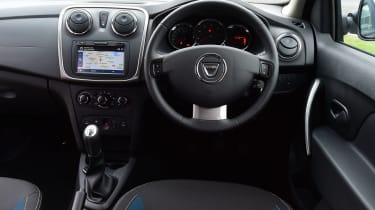 The Sandero isn’t a driver’s car, either, and its road manners pale in comparison to cars such as the Ford Fiesta and even the Vauxhall Corsa. The steering is vague and surprisingly heavy at low speeds, the gearbox is notchy and there’s plenty of body roll. The soft set-up does absorb potholes and bumps nicely, though.