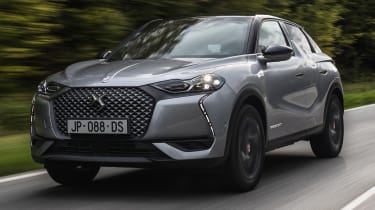 The DS 3 Crossback E-Tense is not an electric car destined to change driving as we know it, but it is a package fielding a useful range and one or two commendable traits missing from some less flair-focused rivals. Performance Line cars aren’t eye wateringly expensive – either on list or on a monthly PCP deal – but if bang for your buck is your priority, Hyundai and Kia offer better value. Buyers seeking an electric car a little more left-field and unique shouldn’t be disappointed, but be sure to do your sums - you might need to stick some options on, given the level of standard equipment.

DS holds more than just ambitions of becoming an established premium carmaker – and is quickly evolving into something of a French thorn in the side of the usual Audi, BMW and Mercedes suspects.

This is a brand that wants you to take it seriously when it comes to electric cars, too, signalled by a prolonged period of sponsorship within Formula E – F1’s all-electric cousin. Last year, in fact, the French firm lent its name, money and PSA-derived powertrain technology to the eventual winners of the series.

Away from the racetrack the brand is preparing for electric success on the road, too, with this: the DS 3 Crossback E-Tense. It’s an all-electric B-segment SUV – a plug-in alternative to the likes of the Audi Q2, Volkswagen T-Cross and the latest, more upmarket Nissan Juke.

It’s neatly integrated into the regular DS 3 Crossback line-up as just another powertrain option. That means buyers can select this silent, emission-free option in nearly all of the regular car’s regular trim levels, while its main rival – the Hyundai Kona Electric – is span off a little from the rest of its ilk.

It also means that the entry-level DS 3 Crossback E-Tense is cheaper than the Hyundai, given that the 39kWh battery version of that car can no longer be ordered. At a little over £30,000 after the government grant (for the Performance Line derivative we tried), this suddenly sizes up as a small premium electric SUV with a somewhat alluring price tag. 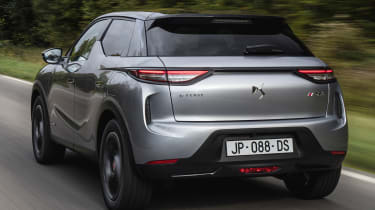 Under the metal it rides on the same underpinnings as petrol and diesel versions of the DS 3 Crossback. Open the bonnet and you could be mistaken for thinking there’s an engine there, given that’s where a lot of the mechanicals for the electric drivetrain reside. As such, there’s no front boot.

The 50kWh battery is mounted under the floor, sending drive to the front axle. DS claims a power output of 134bhp, with 260Nm torque; 0-62mph takes nine seconds and top speed stands at 93mph. The all-important maximum range is tagged at 200 miles according to WLTP standards.

It’s a useful range and based on our test drive it’s one that you should get close to. It does mean that this car doesn’t push the boundaries of how far an electric car of this sort of price can go, however. The Kona is slightly more expensive, but you can wring more from its 64kWh cell. It’s a similar story with the current class benchmark – the Kia e-Niro. You’ll pay a little more, but you’ll get up to 282 miles on a single charge.

Of course, not every EV driver will need so much range. If the 200 miles claimed by the DS 3 Crossback E-Tense is all you need, then what about the rest of the package?

The DS 3 Crossback E-Tense can recharge at up to 100kW. Find a suitable charging station, and you can top up the cell from zero to 80 per cent full in around 30 minutes. The brand is hoping to score a deal for reduced price charging at BP Chargemaster stations for buyers in time for UK launch early next year, and DS has a line-up of wall-boxes for home charging, too. It’s all bundled with an updated version of the MyDS smartphone app, which allows owners to remotely programme or activate recharging if the vehicle is plugged in, and pre-condition the cabin to a suitable temperature, too.

Get settled behind the wheel and what you find is a small SUV that feels really quite heavy. The electric motor and battery setup adds an extra 300kg compared to an average petrol version of the Crossback, and it’s difficult to miss. 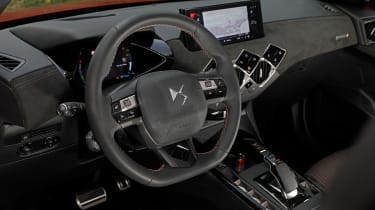 It’s by no means bad to drive – and the weight is all in the floor of the car – but it’s a softly sprung vehicle, too. This means, while the DS 3 Crossback E-Tense rides very well on good to average surfaces, elsewhere it suffers as the heft drags it into the holes on the road. Introduce undulations and the body control feels like it could be a little tighter. Big ruts and rips in the road, such as motorway expansion joints, can ripple through to the cabin as well. It’s not as sharp to drive as the Hyundai or the Kia.

The major pull is that this is an electric car with a brilliantly refined electric drivetrain. Performance doesn’t quite arrive with the typical immediate burst of electric power right at the top of the pedal; instead the E-Tense builds its pace steadily, but very, very quietly. Compared with the regular car, DS has introduced thicker door panels, thicker glass and has added an acoustic windscreen. At motorway speeds, it cruises as quietly as far more expensive electric machinery. The only slight intrusion is the wind noise induced by the large wing mirrors.

There are three driving modes accessed by a drive selector switch on the centre console. In normal operation, the car uses just 107bhp, with kickdown and Sport mode unlocking the full 134bhp. An eco mode restricts power to 80bhp to maximise range, and additional brake regeneration can be added to the experience by rowing the gear selector backwards and forwards on the move – all very simple. 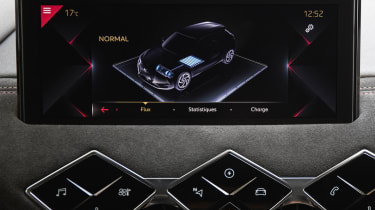 The cabin does just about enough to convince you that this is a car positioned a bit above the market’s mid-point. Cloth upholstery is fitted on Performance Line cars but the Alcantara touches across the dashboard and many of the interior touchpoints work well, and while it’s a totally subjective subject, there’s certainly merit in the madness of the interior design.

It’s quite unlike anything else on the market to sit in. It’s not the most spacious interior by any stretch, however, and the infotainment and dependency on touch-sensitive buttons to operate many interior functions is still a little frustrating.

Equipment levels are a bit hit and miss. Performance Line cars feature many of the car’s signature touches, such as the flush door-handles, automatic air conditioning, and the seven-inch digital instrument panel. Lane keep assist, cruise control and emergency braking are all included, too.

But you’ll need to upgrade if you want LED lights, and you’ll get a smaller seven-inch central touchscreen as default. Even navigation is optional, coming as part of a pack including a larger 10-inch central display.