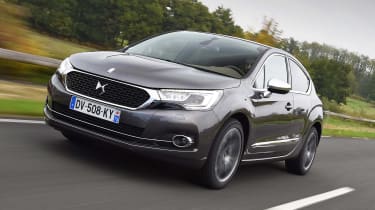 The improvements to the DS 4 are clear, but there aren’t enough of them to put it on a par with class leaders. While it looks more distinctive and is a bit more comfortable, given DS’ focus on refinement, it’s a surprise that the car still falls short of BMW and Audi models here. A more suitable engine would help, but practicality remains an issue. For that reason, the DS 4 is, as before, a quirky alternative to the established class leaders.

The DS 4 hasn’t had it easy since launching in 2010. Tasked with taking on the cream of the premium hatchback crop – but originating from the mainstream Citroen C4 – it stumbled out of the blocks.

Yet this is the new, fresher-faced version and big changes have not only been made to the car, but also to the DS brand itself. This DS 4 is only the second model from DS since it was separated from Citroen last year, following the larger updated DS 5.

The facelifted car now has a bolder, more distinct image, adorned with DS’s own motif. The front and rear ends are reshaped, while there are new LED headlamps and an array of personalisation options for the body and roof. 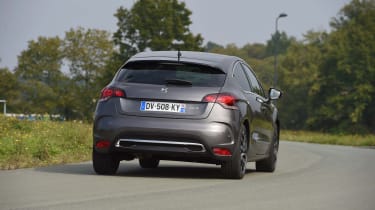 DS is also attempting to lure customers by making the DS 4 more conventional. It’s lower than before, so its shape is more akin to the Audi A3 and BMW 1 Series. Those who liked the previous car’s raised ride height will take comfort from the DS 4 Crossback, which benefits from SUV styling and an elevated stance, but without the associated ability.

In the standard hatch here there’s also more performance on offer thanks to the new 208bhp 1.6-litre petrol turbo. It’s lively and eager, pulling willingly from under 2,000rpm right through the range. But it sounds strained as the revs build, and it fares no better when you head out on the motorway. The dull drone from the engine only adds to the wind noise kicked up by the A-pillars and wing mirrors.

There are softer springs and dampers to soak up road imperfections better, so the ride quality has improved, but is it more comfortable than the Audi or BMW? Not quite. It’s still too firm, tending to crash over bumps. 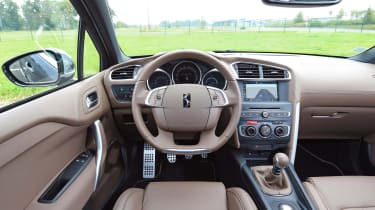 On the flipside, that does mean the DS 4 handles quite neatly. You can carry a fair amount of speed through a corner and the body will remain largely flat and composed. We just wish the steering had more life. It’s elastic in feel and too quick to self centre, which can be unnerving at higher speeds.

The cabin, however, is plush. In top-spec Prestige trim, every surface is finished in leather, making the car feel more upmarket than rivals. The sumptuous seats are another highlight, too. There’s no shortage of standard kit, either, with navigation, a reversing camera and dual-zone climate control, as well as an array of safety tech.

That makes the DS 4 good value against the A3 and 1 Series, both of which would cost a lot more if specced to similar levels.