Those numbers are achieved by a mix of petrol and battery power; the former comes in the shape of a 1.6-litre turbocharged four-cylinder producing 197bhp. While the latter comes as two electric motors – one driving the front wheels, the other the rears – each produce 108bhp, resulting in a total output of 296bhp and 450nm of torque.

Transmitted to the road via an eight-speed automatic gearbox and all four wheels, it’s power is enough for the E-Tense to cover the 0-62mph sprint in 6.5 seconds and reach a top speed of 136mph. Leave the car in Zero Emission mode – one of four available – and its top speed is reduced to 83mph.

The motors draw their energy from a 13.2kWh lithium-ion battery, which can be recharged in two hours through a 32A, 6.6 kW charger or eight hours using a regular three-pin plug. Alternatively, the batteries can gain a minor top-up on the move, through regenerative coasting and braking systems or the the petrol engine itself.

In addition to the Zero Emission mode, the driver can select from a Sport mode, which maximises power output, a Hybrid mode, which mixes both petrol and electric systems, a four-wheel drive mode for off-road excursions, and E-Save mode, which retains up to 12 miles or so of charge for the end of a journey – ideal if your destination is in a busy city.

These functions can be controlled in real time through the car’s touchscreen infotainment system. The new menus are one of only two changes to the car’s interior relative to the non-hybrid DS 7; the other being a subtle ‘E’ embossed onto the gear selector. Boot space remains the same 555 litres as the standard car, as the batteries don’t intrude into the cargo area. From the outside, there’s a set of 19-inch alloy wheels and a new ‘Crystal Grey’ paint finish.

The DS 7 Crossback E-Tense is the first DS to feature electrification, in a move that will soon see every car in the French brand’s range following suit. Prices have yet to be confirmed, but the new model is due to reach showrooms in 2019.

Welcome to our Paris Motor Show hub page. Scroll down for all our Paris content...
DS 7 Crossback review 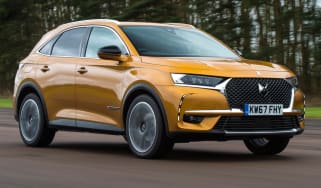