Built in very limited numbers, the FXX-K Evo is available for standard FXX-K owners and a few cherry-picked customers 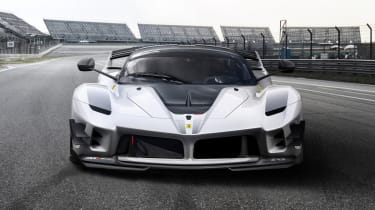 The Ferrari FXX-K Evo - an evolution of the LaFerrari-derived track-day FXX-K - has been launched with extra downforce and extra exclusivity.

Built as an 'extremely limited-run model', the FXX-K Evo shares the same 6.3-litre KERS-boosted V12 as the standard FXX-K, which produces 1,036bhp and over 900Nm of torque. But it's in the aerodynamics department where the Evo benefits over the standard model.

Downforce coefficient has been improved by 23 per cent over the standard FXX-K and 75 per cent over the road-legal LaFerrari, with 640kg of downforce generated at 124mph. The increase in coefficient is down to a twin-profile rear wing with two side fins and a central fin. They work in tandem to provide an extra 10 per cent rear downforce. 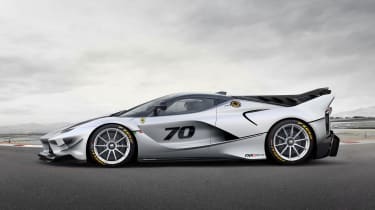 A re-designed rear bumper has aided the airflow underneath the rear diffuser, adding an extra five per cent in downforce, while vortex generators have been introduced on the undertray to provide 30 per cent extra downforce overall.

In addition to the new aero package, the FXX-K Evo also benefits from new front brake air intakes and recalibrated suspension all-round to coincide with the revised aerodynamics. 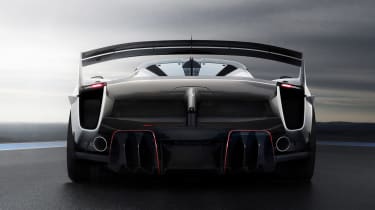 The FXX-K Evo can only be obtained if Ferrari gives you its blessing, or if you’re an existing FXX-K customer looking to upgrade your track-day specialty. The price is unknown but with the standard FXX-K fetching around £2 million, the Evo should cost in the region of £2.5-3 million.

The FXX-K is the third generation in Ferrari’s XX track-day programme. It started in 2005 with the Enzo-derived FXX, followed by the 599XX based on the 599 super-grand tourer.

What would you give to drive the Ferrari FXX-K Evo? Tell us below!