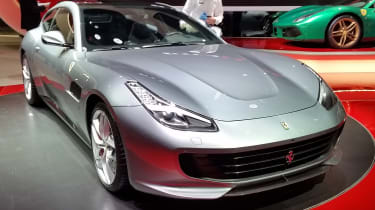 The Ferrari GTC4 Lusso can now be had with the turbocharged V8 from the 488 supercar, and has made its public debut at the 2016 Paris Motor Show. It's the brand's first four-seat car in history to be fitted with a turbo V8.

The entry-level version of the Ferrari FF-successor will be rear rather than four-wheel drive, although it’ll retain the V12 car's rear-wheel steering system. This has been enhanced to suit the car's rear-drive layout and 46:54 rear weight bias, while the cars magnetic adaptive dampers and host of Formula One-derived electronics have all been specifically tailored to the car.

Ferrari says the V8 engine “suits day-to-day driving in urban contexts” suggesting that while the four-wheel drive V12 will remain a true GT car, the V8 will become the more usable everyday model. The Lusso T’s dynamic control systems have been specifically calibrated to boost responsiveness, too.

The new GTC4 Lusso T will accelerate from 0-62mph in 3.5 seconds and hit more than 199mph flat out. The V12 uses its 4WD grip to complete the benchmark sprint in 3.4 seconds, while its extra power helps it to a top speed of 208mph. 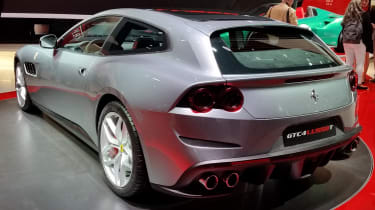 Styling wise, there is little to tell the V8 and V12 models apart. Inside, Ferrari boasts a unique Dual Cockpit architecture, designed to “enhance the shared driving experience for both driver and passenger”. A 10.25-inch HD capacitive touchscreen utilises the latest Apple CarPlay technology, while the four-seat cabin layout is unaffected by the new rear-wheel drive set-up.

Prices haven’t been announced, but expect it to be significantly less than the V12’s £230,430 starting figure, although still in six figures, while first deliveries should commence in 2017.

Do you like the look of the Ferrari GTC4 Lusso? Give us your view in the comments...