'It's good news the FCA/Renault merger has fallen through'

The idea of a potential merger between FCA and Renault sounded like a bad idea, so Mike Rutherford is glad the deal has fallen through 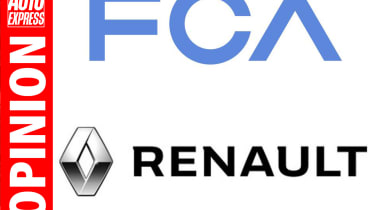 Car companies are a bit like musicians. First, there are the brave solo artists such as McLaren, then the busy duos – Jaguar Land Rover being the most obvious example. After that come the tightly run trios (Hyundai-Kia-Genesis), followed by the large but just about manageable four or five-piece groups (Peugeot-Citroen-DS-Vauxhall/Opel), then the noisy big bands (Volkswagen Group).

• Classic Fiats: back through the history books at FCA's Heritage Hub

Too big? Don’t forget that Renault has an alliance with Nissan and Mitsubishi, which could, eventually, join the fray, too. Which car man or woman would have the energy, experience and delicate skills needed to be the boss of bosses at such a colossal, culturally diverse outfit? Would it be run from Turin, Detroit or Paris? Will it mean more or less choice for consumers? Can we look forward to some French-built Renaults cynically wearing, for example, Jeep badges? Chrysler’s Detroit factories building the French firm’s Twizy and ZOE EVs, perhaps? Truth is, nobody knows the answers at this early stage of the negotiating game.

My take? Big can be beautiful. But not always. A Fiat-Chrysler-Renault-led band of brothers backed by supporting members could find itself with too many small models, too few EVs, not nearly enough medium-to-large cars and only a tiny number of premium (ie Alfa and Maserati) products. The mix doesn’t sound, or feel, right to me.

Would a better fit for FCA be a formal collaboration with – or even a total buyout of – Jaguar Land Rover, a firm that designs and builds the sort of prestige electric and non-electric sports, saloon and all-wheel-drive cars that Fiat-Chrysler and the vast majority of its brands currently struggle to make for themselves?

The Peugeot group is rumoured to have concluded it badly needs JLR under its wing if it’s to grow into a car company capable of catering for the needs of 90 per cent-plus of the world’s buyers. That’s why the former is understood to have tried – and so far failed – to acquire the latter. This leaves the door ajar for FCA – or maybe even Hyundai-Kia – to buy the British firm from Tata of India, which has taken JLR as far as it can and should, perhaps, allow a fresher, wealthier successor to take the reins. That’d be a good thing.

I’m all for mergers. For car makers to develop the EVs they need to avoid legislators lumping big fines on them, not to mention the expensive autonomous tech so few buyers seem to want, these relationships are a must. Those that remain solo artists might not survive. But those that create monster supergroups can be a step too far, not least because products can often overlap. (SEAT, Skoda and VW brands, please note.)

Since writing this column a few days ago I see FCA has come around to my way of thinking and concluded that the fit between it and Renault doesn’t feel - and isn’t - right. Therefore the proposed deal between the Italians and Americans on one side and the French car maker/French Government/French Trades Unions on the other is well and truly off.

But don’t think this marks the end of merger mania this summer and autumn. With JLR’s just-announced tech tie-up with BMW, might the German firm be lining itself up to buy JLR, lock stock and barrel from current owner, Tata? The Germans will rightly argue that they’ve done a great job with Rolls-Royce at their Goodwood factory and an even better one with MINI in Cowley/Oxford.

But remember how it all went horribly wrong a couple of decades ago when BMW met Rover at Longbridge? How can we ever forget that desperately dark debacle? For the British Midlands it was a tragedy. Let’s not have a repeat of that, eh?

Did you enjoy reading Mike's column? Then click here to read some of his previous columns...