Jaguar Land Rover and BMW to work together on electric cars 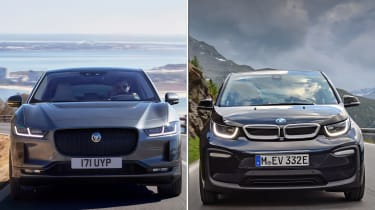 Jaguar Land Rover and BMW are to work together on developing electric car powertrains for the next generation of EVs, it has emerged.

The companies behind the I-Pace and i3 electric cars have elected to join forces on developing new Electric Drive Units (EDUs) - in effect, everything that takes electricity from batteries and gets it through to the wheels on the road. As a result, future products from the two rivals are likely to have the same basic electric motor design.

Nick Rogers, Jaguar Land Rover’s Engineering Director, said, “The transition to ACES [Autonomous, Connected, Electric, Shared] represents the greatest technological shift in the automotive industry in a generation. The pace of change and consumer interest in electrified vehicles is gathering real momentum and it’s essential we work across industry to advance the technologies required to deliver this exciting future.

“We’ve proven we can build world-beating electric cars but now we need to scale the technology to support the next generation of Jaguar and Land Rover products. It was clear from discussions with BMW Group that both companies’ requirements for next-generation EDUs to support this transition have significant overlap, making for a mutually beneficial collaboration.”

The deal is a significant one for Jaguar Land Rover, a relative minnow in global car manufacturing, because while the jointly engineered drive units will be made by each company in its own facilities, both brands will also benefit from increased economies of scale in purchasing the parts for those systems. And as a result, JLR will be able to tap into the massive buying power of BMW and get parts for its EVs more cheaply.

The announcement from the British firm says, “Joint investment in research and development, engineering and procurement will provide the necessary economies of scale to support increased consumer adoption of electric vehicles.”

BMW, on the other hand, has struggled to move its electric vehicle projects on since the launch of the original i3 back in 2013. It will hope to gain expertise from the Jaguar Land Rover team that delivered the I-Pace last year, beating all of the leading German premium brands to market with a bespoke family-sized pure-electric vehicle and winning a string of awards, including Auto Express Car of the Year.

The German brand has revealed some details of the basis for the development. It says that the fifth generation of its eDrive tech - to be introduced in the forthcoming iX3 all-electric SUV, due next year - will be the system used as the starting point for the JLR joint project.

“The automotive industry is undergoing a steep transformation,” BMW’s board member for development, Klaus Frohlich. “We see collaboration as a key for success, also in the field of electrification. With Jaguar Land Rover, we found a partner whose requirements for the future generation of electric drive units significantly matches ours. Together, we have the opportunity to cater more effectively for customer needs by shortening development time and bringing vehicles and state-of-the-art technologies more rapidly to market.”

JLR will make the powertrains resulting from the development at its Wolverhampton-based Engine Manufacturing Centre (EMC). A statement from JLR said, “A team of Jaguar Land Rover and BMW Group experts will engineer the EDUs with both partners developing the systems to deliver the specific characteristics required for their respective range of products.” The deal is being described as a “technical and commercial collaboration” - although no details of the financial aspect of the arrangement have been issued.

However, the acknowledgement that both companies will work on specific characteristics shows the breadth and scale of the agreement. Land Rover may want more rugged systems for its off-road products, while BMW is likely to require extra refinement to fit the units into the likes of the 7 Series or even Rolls-Royce models.

BMW has confirmed that the joint project will be based in Munich, with its engineers sharing office space with Jaguar Land Rover personnel.

The deal comes just weeks after JLR boss Dr Ralf Speth said he favoured independence on electric vehicle R&D. “I guess I see it in a different way,” Speth told the Financial Times Future of the Car Summit. “You can talk about economies of scale and that’s correct. But on the other hand, there’s the freedom we have to develop and do our own strategy in a fast way, a structured way. This gives us a lot of power."

Do you think the JLR and BMW partnership will be successful? Let us know your thoughts below...

An electric BMW iX1 is on the way, but will continue alongside combustion-powered X1 alternatives when it goes on sale within two years
Jaguar Land Rover Aluminium Upcycling initiative to slash carbon emissions