The 500X is not the ultimate family hauler, but there aren’t too many compromises in the name of style 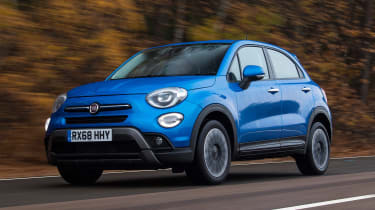 The 500X is only available in a single body type, and it’s essentially a five-door hatchback in the pumped-up crossover style. It sits between the 500 and the 500L in terms of interior space, and should be big enough for most young families.

The driving position is higher overall than the 500, but you sit in a lower, sportier position within the car. Up front there are two glove boxes, large door pockets and a deep storage bin underneath the armrest.

There have been compromises to practicality in the pursuit of style though – the rear window is tiny, which makes visibility a pain, and the seats are not the most supportive. 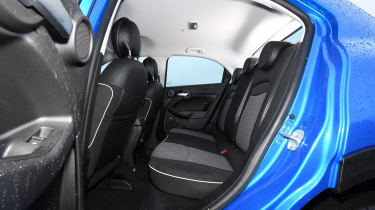 Rear passengers who are shorter than six-foot will have enough headroom and legroom, but if you're any taller it starts to become a squeeze. There are ISOFIX points for child seats in the rear bench as standard.

At 350 litres, expanding to 1,000 litres with the 60/40 split rear seats folded down, the boot is actually smaller than the Countryman, Juke and Captur, but considering 60 per cent of buyers in this class name styling as their number one motivation, Fiat won’t be too worried about that.

The boot space itself has a useful wide opening, while a moveable boot floor can be set at two levels - one level with the boot lip for easy loading and a flat boot floor with the rear seats folded down, and the other lower down to maximise space.