Just like the Fiat Panda's namesake in the wild, small diesel cars are a surprisingly rare breed. Despite the obvious advantage of mixing lightweight bodywork with the economy and performance of a modern turbodiesel engine, few manufacturers currently offer such a combination. 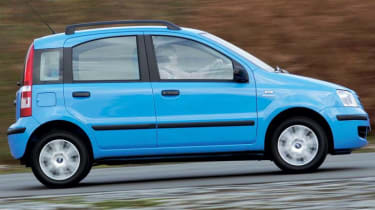 With the power of the Multijet engine, the Panda is a capable all-rounder, and the extra performance and economy on offer is sure to impress new drivers. But the improvement comes at a cost, which at this level might be too much for many buyers. A basic version would be great news for bargain hunters.

Just like the Fiat Panda's namesake in the wild, small diesel cars are a surprisingly rare breed. Despite the obvious advantage of mixing lightweight bodywork with the economy and performance of a modern turbodiesel engine, few manufacturers currently offer such a combination.

But by fitting the sophisticated 1.3-litre 16-valve Multijet to its new supermini, Fiat has created the most powerful Panda yet - and added a small diesel city car to the market in the process.

Launched in the practical Idea and available in the soon-to-be-replaced Punto, the Multijet produces 70bhp - an increase of 10bhp over the Panda's 1.2-litre petrol unit. The new car has the likes of the Hyundai Getz 1.5 CRTD and Citroen C2 1.4 HDi in its sights, and aims to blend performance and economy.

The extra power means the Panda sprints from 0-62mph in 13 seconds and reaches 99mph. As a result, Fiat says the car will appeal to buyers wanting the fastest variant in the range, as well as those looking specifically for an ultra-economical diesel.

A loud rattle at idle means there's no mistaking this model is an oil-burner when you start it up, but once on the move refinement improves appreciably. At cruising speeds, the powerplant feels extremely smooth and is quick to respond to the throttle, so long as you don't rev it too hard.

With peak torque of 145Nm arriving at 1,700rpm, the Panda delivers its best at low engine speeds. Outright pace isn't startling, but around town the car's impressive in-gear performance gives it a significant advantage in traffic over petrol-powered competition.

Where the diesel makes the most difference, though, is on the motorway. Here, the Panda Multijet is capable of cruising without the need for constant gearchanges to maintain speed.

Despite the extra weight of the oil-burning engine, the ride is comfortable, and the car feels much more stable than its small size would suggest. The Fiat is more than capable of keeping up with fast-moving traffic.

This model will get you a lot further between fill-ups than petrol-powered Pandas, too, and Fiat claims a combined consumption figure of 65.7mpg.

Apart from the extra performance on offer, the new diesel is identical to other Pandas. That means plenty of space inside, along with light steering - with the 'city' button to provide further assistance for parking - and a dash-mounted gearshift.

Functional yet fun, the Fiat's cabin is more accommodating than its competitors', with the high seating position and large glass area making it feel bigger. Recent changes to the Panda's specification mean the Multijet model now has a CD player, as well as remote central locking, as standard. An optional audio pack is also available - this combines steering wheel controls, a five-disc CD changer, MP3 compatibility and additional speakers for £550.

However, the vehicle that was crowned Auto Express's 2004 Car of the Year is not completely above criticism. As soon as you start to specify options such as air-conditioning, the Panda gets expensive.

The diesel is already £900 more than the petrol car, and as it's currently available only in flagship Dynamic trim, you'll need to cover lots of miles to recoup the extra cost. That's a pity, as otherwise the 1.3 Multijet is the best all-round performer in the Panda range - particularly if you want to escape the confines of the city once in a while.