The new Panda impressed in diesel form, so now we try the ultra-efficient TwinAir version 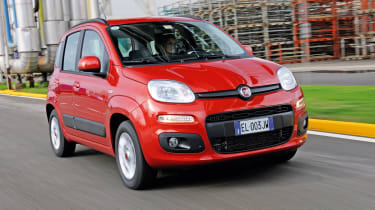 The Fiat Panda is one of the best small cars around. It’s well built, good-looking and fun to drive. It’s practical, too, and ideal for young families. However, UK pricing has still to be confirmed – and it looks like base versions of the VW up! will be cheaper. Still, while we couldn’t match its economy claim, the Panda really is a great car. Fiat should feel confident in raising a toast to the next 16 million drivers.

Nobody builds small cars quite like Fiat. The company’s 500 sets the pace for style and desirability, while the Panda can rightly claim to be the world’s most popular small car.
Fiat reckons 16 million people have driven a Panda since its 1980 launch. But while there’s no questioning the winning formula, can this new, third generation continue that success?
The five-door-only model promises to be the most versatile and practical Panda yet. It’s 11mm taller, 114mm longer and 65mm wider than before, and while this might not sound much, it’s a big deal in a world obsessed with downsizing. The car’s wheelbase remains unchanged, but there is a little more room inside.

The styling is softer – and even the lights have been rounded off, creating shapes which Fiat calls ‘squircles’. This theme has been applied to the radio controls and instruments inside as well, while the padded steering wheel creates the illusion that it’s slightly square.
The Panda is built at a brand new factory in Italy and has a fresh focus on quality. The cabin is robust and the seats comfortable. It’s not all good news, however, as the high-mounted gearlever and bulky steering column cladding bump up against tall drivers’ knees. Rear seats are spacious, though, and the boot is large enough for two suitcases.
We’ve already tested the 1.3-litre diesel; now it’s the turn of the sub-100g/km 82bhp 900cc TwinAir petrol turbo. The two-cylinder pulls well from 2,000rpm but sounds gruff and sends vibrations through the base of the seat. Yet it’s not short on character or performance.
One disappointment is fuel economy. Although the Panda has stop-start, which kills the engine when the car is stationary, we didn’t see more than 38mpg – well down on Fiat’s 72mpg claim.
On the plus side the new Panda is a good cruiser, and on winding roads it’s great fun to drive. In fact, it’s more engaging than its key rival, Volkswagen’s three-door up!, thanks to accurate steering and a responsive throttle. It also rides bumps smoothly and stiffer anti-roll bars mean it won’t roll and wallow through corners, even when loaded up.
All of which backs up Fiat’s promise that this is the most versatile and practical Panda yet. That, together with a big-car feel which comes from improved build quality and a larger interior, means the up! will have a fight on its hands when this new Fiat arrives in the UK in February.
Share this on TwitterShare this on FacebookEmail