All-new Panda supermini gets bigger and better cabin, plus range of clean engines. So is it a winner? 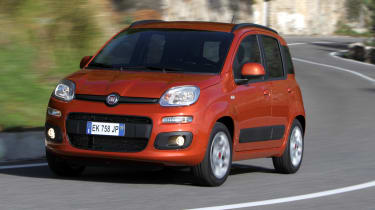 Despite the Fiat Panda’s three-decade lifespan, this is only the third all-new model, and it offers the same no-frills charm as its predecessors. Better cabin materials, more interior space and a rounder design make it more appealing than ever, while there’s a great choice of cleaner two, three and four-cylinder engines. As cars become increasingly complex, the Panda remains a refreshingly simple choice.

The Fiat Panda has always stood for fun, no-frills motoring. Now, 31 years after the original was launched, the third generation of the car has arrived. Fortunately, Fiat is sticking closely to the tried-and-tested formula – and who can blame it, with 6.5 million sales so far.
The new car is 110mm longer, 50mm wider and 10mm taller than its predecessor, while the wheelbase is still 2,300mm. The more rounded exterior styling is closer to the Fiat 500, with which the new Panda shares its underpinnings. Blacked-out B and C-pillars create a semi-floating roof effect and LED lights have been added below the headlamps, but that’s about it when it comes to design flair.
Inside, the dash incorporates an open storage area – a nod to the original 1980 Panda – and a regular glovebox. The chunky switchgear looks great and matches the squared-off gearstick. Plus, like Renault, Fiat has paired with TomTom to offer integrated yet removable sat-nav.

There’s more room inside thanks to larger dimensions and slimmed-down seats. But while passenger space is generous, the 610mm of rear legroom is less than you’ll find in a VW up! or Kia Picanto. Still, the Panda does have a unique front passenger seat that folds down to form a table.
The rear seats can be slid back and forth to increase boot space from 206 to 225 litres, or folded flat to offer 870 litres.
As with the original Panda, the new car is offered with two-cylinder engines. There are two TwinAirs, producing either 64 or 84bhp, as well as a 68bhp, 1.2-litre four-cylinder petrol.
We drove the 74bhp 1.3-litre Multijet diesel. Torque has risen by 45Nm to 190Nm, but its performance felt similar to the old engine – a result of the new car gaining 80kg. Throttle response is sharp at 1,600rpm, but by the time it gets to 3,400rpm, you’ll be reaching for the next gear.
The Panda retains its nippy and easy-to-use character around town thanks to light but direct electric power-steering, yet you’ll find it hard to keep up with traffic on faster country roads and motorways.
Fiat has kept the MacPherson front suspension, while adding new dampers and revising the torsion beam in the rear axle for a more comfortable ride. The Panda now deals with bad surfaces much better than before, and body control has been vastly improved thanks to wider front and rear tracks.
Fiat is confident the list price won’t go up, despite these upgrades, better standard kit and a higher-quality interior. Running costs will drop as the diesel’s fuel economy has improved from 65.7 to 72.4mpg, while its CO2 emissions have tumbled 5g/km to 109g/km. For tax-free motoring, you’ll have to go for a TwinAir – both fall under the 100g/km barrier.
Share this on TwitterShare this on FacebookEmail