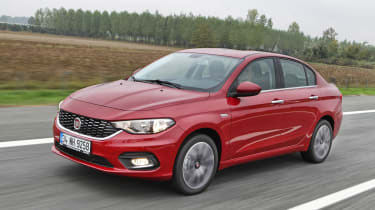 By undercutting the family hatch big-hitters in price, rather than beating them at their own game, the Tipo succeeds where the Bravo couldn’t. It’s merely average to drive and interior quality isn’t great, but with good looks, plenty of space and that promised super-low starting price it looks to offer decent value. We’ll have to wait until the hatchback appears for a more conclusive verdict, however.

Fiat has seen huge success in the UK and Europe in the last few years with its range of small cars; the 500 city car in particular has flown out of British dealerships for several years now. But the larger C-segment has proven a tougher nut to crack.

The Italian brand’s last two efforts, the Bravo and before that the Stilo, struggled to make an impact as they were positioned next to more talented class leaders such as the Ford Focus. So Fiat has taken a leaf out of Dacia’s book and said “if you can’t beat them, undercut them”. Enter the new, value-oriented Tipo.

• New Fiat Fullback pick-up to take on Navara and Hilux

The Tipo name was last seen on Fiat’s boxy family hatch in the early nineties, but was actually first used over a century ago by the brand. In some markets, including where it’s built in Turkey, you’ll find an ‘Aegea’ badge on the back instead. The UK, like the rest of Europe, will use the Tipo name, but not on the four-door saloon you see here.

We’ll only be receiving a five-door hatchback and estate (both of which will be shown at the 2016 Geneva Motor Show), as the small saloon market is marginal over here. Other markets will have the choice of all three. Fiat bosses tell us left-hand drive cars will arrive in the middle of 2016, but the delays in conversion to right-hand drive will mean we won’t be driving one on British roads until around September next year. 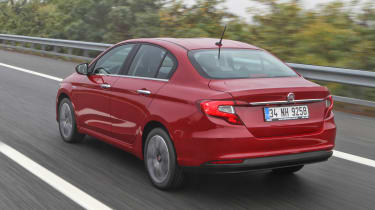 The Tipo was designed from the outset as a saloon, unlike most rivals that are converted from existing hatchbacks. That’s evident in the neat proportions, and we’ve been told to expect the hatchback and estate will be identical from the rear doors forward. Keeping the design changes to a minimum between the bodystyle saves money, and Fiat is keen to point out that the Tipo is a “Skills, no frills” model.

Cars like the Skoda Rapid are cited as main rivals, yet the Tipo is arguably better looking thanks to the classy front-end design, smart shape and distinctive tail-lights. It starts from an impressively low 12,500 Euros in Italy, but UK prices are yet to be confirmed. Bosses assure us, however that it will “astonish the market” in terms of pricing. 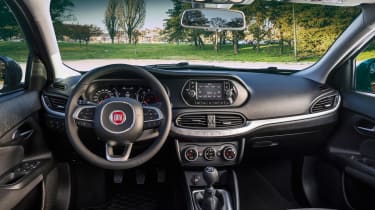 Although the outside doesn’t give away the Tipo’s budget intentions, the inside does to an extent. The steering wheel and some switchgear is borrowed from the 500 range and feels of adequate quality, but on the lower dash and doors you’ll find hard, scratchy plastics and a mixture of unpleasantly cheap-feeling textures. Equipment is good, however, with all models getting air conditioning, cruise control and a five-inch ‘Uconnect’ touchscreen with Bluetooth connectivity. UK specs are likely to be broadly similar.

What you also get a lot of is space. At 4,530mm long it’s 275mm longer than a VW Golf, and legroom is plentiful for rear seat passengers. The sloping roofline eats into head space slightly, but there’s still room for a 6ft 2 driver to sit behind himself easily. As you’d expect from a saloon, the boot is a sizeable 520 litres, although the conversion to hatchback form may see that reduce slightly. 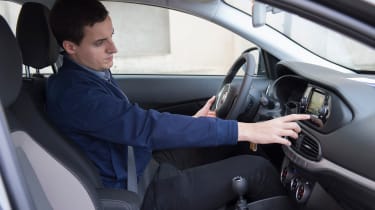 Our test car came with Fiat’s familiar 118bhp 1.6-litre Multijet diesel engine. There’s also the option of a 94bhp 1.3-litre diesel engine with emissions as low as 98g/km, while naturally-aspirated 1.4 and 1.6-litre petrol engines will also be offered. No MultiAir turbo petrol will be fitted, as engineering deemed it cost ineffective for this market. Further indications of cost-saving include a simple torsion-beam rear suspension setup.

On the road it’s clear the Tipo has been set up with comfort in mind, with a soft setup smoothing out all but the roughest of Turin’s potholed roads. Some suspension thud is evident, but overall the Tipo is refined enough considering the competition. Enter a bend quickly and body roll is noticeable, however, while the steering is well-weighted but lacks any sense of feel. It’s perfectly fine dynamically, but a Ford Focus it is not. 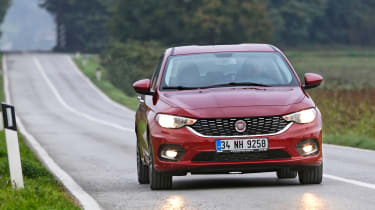 The 1.6-litre diesel, however, is only adequate. There’s noticeable lag in lower gears, and while it’s subdued at a cruise it becomes noisy past 3,000rpm. It pulls-well once there, however, and is quick enough for the class average, but CO2 emissions of 110g/km are easily beaten by the 1.5 TDCI 120 Focus, which puts out 98g/km.