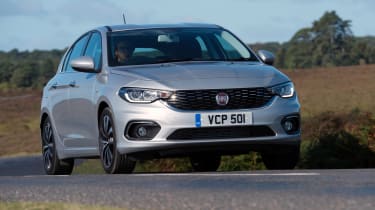 The Fiat Tipo focuses on price, but it hasn’t cut corners with its styling. Taking design cues from the brand’s flagship 124 Spider roadster, the car gets a wide grille, chrome details and double-bubble roofline that all give the hatchback presence on the road.

There are more vents underneath with chrome scoops to reinforce the sportier look on Lounge trim cars, but the slats in the lower grilles don’t feature the glossier silver inserts used in the main radiator inlet. Plenty of flowing lines give the car a sharp look, and the raked windscreen means it appears sportier than many practicality-focused five-doors, too.

It’s easy to see where the Tipo’s versatility comes from, as the upright tailgate helps to maximise boot space, given the car’s relatively compact overall proportions. The design isn’t quite as taut at the rear, but the boot-lip spoiler balances the lower front bumper and 17-inch two-tone alloy wheels that comes as standard on our test model. The range of colours isn’t great, and aside from silver, a dull red is the brightest hue among plenty of greys plus brown and dark blue.

There are two body styles, and the SW estate’s design is very similar to the hatch, but with the obvious extended roofline to make the boot bigger. It adds headroom in the back seats, too.

At this price, and with the Fiat’s relatively attractive exterior design, there’s a risk that pennies could have been pinched inside, but the Tipo’s cabin just about stands up to scrutiny, and the quality of the materials is only really acceptable at best, as harder plastics still dominate most areas.

There’s lots of different textures to contend with, too, as the softer plastic that covers the dash clashes with the material around the air vents, centre console and trim inlays.

However, the Alfa Romeo-sourced climate controls are a neat touch, while the ergonomics are pretty good, too. But the unusual grain Fiat has used on the dash and doors doesn’t exactly have a premium feel. 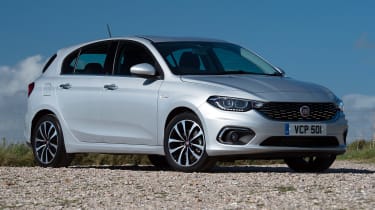 A TomTom-based sat-nav system is fitted in the Fiat. It’s clear and has live traffic updates, but the screen is on the small side, so it’s not as easy to see any detail as it is in rivals. The standard reversing camera is a nice touch, and it’s good enough for parking with, while the buttons around the unit mean it’s easy to use when you’re driving.

While the screen is more responsive than the unit you'd find in a Dacia Logan, it is not what you would call swift or intuitive. The user interface isn’t that bright but it does at least seem to have a colour scheme, unlike the garish Dacia system.