We get behind the wheel of the range-extending Fisker Karma, as its first car is sold in the UK 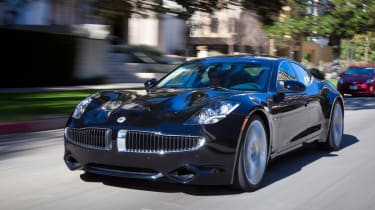 You can compare the Karma to an Aston Martin Rapide or other cheaper alternatively powered cars, like the Vauxhall Ampera, until you’re blue in the face, but there’s truly nothing like Fisker’s range-extender on the road. Its striking proportions are simply amazing to look at, while the build quality and luxury also impress. It also has a powertrain that offers a credible mix of performance and economy. It’s just a shame we’re still waiting for right-hand-drive cars to hit UK roads.

You can’t buy a Fisker Karma from a UK dealer and there's still no confirmed timescale for when right-hand-drive cars will become available. But that hasn’t stopped the California firm selling its first car in England from its European base in Germany to an unnamed premiership footballer. So what better excuse than to take the car that single-handedly made electric cars cool for a spin?

The Karma is proportioned like no other car on sale. It’s a strict four-seater, making it conceptually close to the Aston Martin Rapide. And while it’s roughly the same length and height as the Aston, the Karma is more than 20cm wider and its wheelbase is more than 17cm longer, making it appear ground-scrapingly low-slung.

Its curvaceous body looks excellent, matched by classy details like the solar panels covering the roof, angular low-mounted air intakes on the front bumper and door handles that don’t move when you pull them – they incorporate a button on their underside which allows each door to spring open.

The driving position is very low, with a great sportscar view down the long bonnet that dives out of sight ahead of you. Our car sported the 'Eco Chic' interior option, which means all the wood is reclaimed from trees damaged in floods or forest fires, while the material on the dash top and seats isn’t derived from animal sources.

A small glass panel in the centre console contains what looks like fossilised leaves, adding to the natural theme, and this contrasts nicely with the hi-tech 10.2-inch iPad-esque touchscreen, which controls the infotainment and climate control functions.

Hit the start button to the right of the sci-fi-styled steering wheel, press D on the drive selector and nothing appears to happen. But press the accelerator in the default electric-only Stealth mode, and the Karma’s 22-inch alloys begin to turn in almost silence.

A little faster and the noise generator kicks in. It’s designed to warn pedestrians of your approach, and sounds like the thrumming guitar at the start of The Smiths hit ‘How soon is now?’.

The ride is pretty firm, given the large wheels, but it’s comfortable and easy to drive, with light steering and decent visibility despite its low-slung nature.

The noise generator fades out at 25mph, and, with a flick of the left paddle on the steering wheel, Sport mode is activated, turning the dials orange and kicking the 2.0-litre range-extender petrol engine into life.

Performance is surprisingly good, given its electric powertrain and hefty 2,404kg weight, with its sheer width and firm suspension giving flat, accurate cornering. However, it’s not quite the driver’s car that the Aston Rapide is.