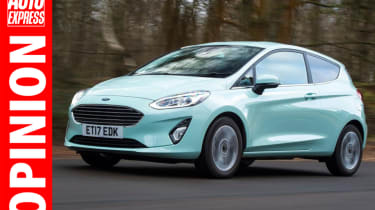 Donald J Trump isn’t the only old, American dude provocatively rocking the global boat. There’s another: Jimmy P Hackett. He spent years in detergent (Proctor & Gamble) before doing decades in office furniture (Steelcase Inc) where one of his best-known and most controversial claims to fame was his closure of US factories – before opening replacement plants in Mexico!

Around 12,000 Steelcase jobs in America were cut as the Hackett Man morphed into Jimmy The Hatchet. Nothing personal, just business. After almost half a century working in washing powder and filing cabinets, Jimmy’s now 60-something and approaching the end of a long and lucrative career.

But before doing so, he’s having a last-minute dabble in another sector. Despite being a comparative novice in the car game, he has in his old age decided to enter and learn from scratch. In effect he’s started and is still serving his automotive ‘apprenticeship’ at Ford. The newcomer’s job title? No big deal – he’s only the President and CEO of the Ford Motor Company!

Annual compensation for the novice? Around $16million (£11.8m or so). The Hackett saga took yet another bonkers turn at the end of last month, when he was still less than a year into his role as Ford President/CEO. He decreed that in North America at least, Ford’s future will be in trucks and commercial vehicles, and that cars are to be sidelined.

He threatened to “reshape” the company by “feeding the healthy part of our business and dealing decisively with the parts that destroy value”. Wow. In Jimmy’s head, trucks equate to healthiness and cars are the destroyers of Ford balance sheets. This is Ford’s worst move in decades.

If the company concentrated harder on ensuring its saloons and hatchbacks are as good and satisfying to own as most Jaguars, Audis, SEATs, Skodas, Kias, Peugeots and Toyotas (currently, with the exception of the Fiesta, it doesn’t), its cars can and will sell. Except they won’t because Jimmy’s killing ’em off.

They chose not to. Neither did they deny my claim that Ford is now a truck maker first, car maker second. More encouraging news from them is that Jimmy’s car-culling antics are specific to North America only, they say. The official word is that “here in the UK (and mainland Europe) we will continue with our broad range of car offerings”. For the time being at least.

Enjoyed this opnion piece? Then take a read of Mike's previous column talking about how the motoring industry needs a calm, convincing leadership.