Ford has filed a patent for a tailgate-mounted video projector, allowing drivers to turn their cars into mobile cinemas. 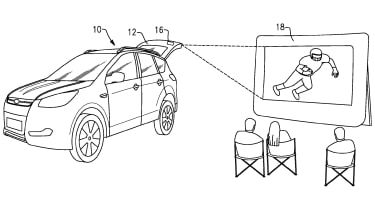 The patent, filed by Ford Global Technologies, describes a video projector mounted on a car’s tailgate. When the boot is open, films or television programmes can be projected from the rear of the car. The wording of the patent suggests the video would be stored on the user’s smartphone, to which the car would be connected.

The projector can also act as a light for illuminating the area behind the car. In addition, it has the ability to emit a yellow light that attracts insects, before electrocuting them with a built-in bug zapper.

It follows Tesla’s recent announcement that it will offer in-car video streaming via the main infotainment screen, allowing drivers to watch Netflix and YouTube when the vehicle is stationary.

The video projector is not Ford’s first crazy patent. The manufacturer has previously patented a system that removes ‘new car smell’ from newly built vehicles by having the windows automatically open and close and, if necessary, starting the engine and using the ventilation system to circulate air.

The firm also revealed its ‘Robutt’ robotic bottom at the start of 2019, which is used in factories to test the effects of someone’s sweat against a car seat, assessing its durability.

Another interesting patent was submitted by Motorola last year. It included plans to turn autonomous cars into mobile courtrooms, with suspects able to be placed into a car by a police officer, identified via facial recognition and questioned using a video link.

Do you like the idea of cars being fitted with tailgate-mounted projectors? Let us know your thoughts in the comments below...