The Ford Fiesta Style is a supermini that has it all: great looks, amazing driving attributes and a healthy regard for your pocket 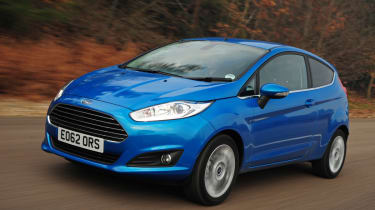 The Ford Fiesta Style has attractive styling, is fantastic to drive and cheap to run - just like all other models in the range - but the equipment levels aren't the best, so we'd go for the Zetec model instead.

The Ford Fiesta is still one of the best cars Ford has ever produced, and is currently our reigning supermini class champion. Even in the cheaper Style model (not pictured) it manages to eclipse rivals like the Vauxhall Corsa and Volkswagen Polo thanks to its sleek looks, sparkling driving experience, low running costs and practical cabin.

The Ford Fiesta Style has certainly helped Ford stay top of the UK’s new car sales chart, with competitive pricing, attractive finance plans and generous equipment. The Fiesta Style comes in both three and five-door guises and gets body-coloured heated door mirrors, manual air-conditioning, electric front windows and a CD radio with USB connection as standard. It also boasts seven airbags, which helps give it a five-star Euro NCAP rating.

However, the Ford Fiesta Style isn’t perfect: the interior is still blighted by some cheap plastics, and while its entry price of £11,695 is tempting, the figure can rise quickly when you start adding some of the optional safety equipment.

But whichever Ford Fiesta Style you go for, the baby Ford is a talented all-rounder that stands head and shoulders above the rest of the supermini class. 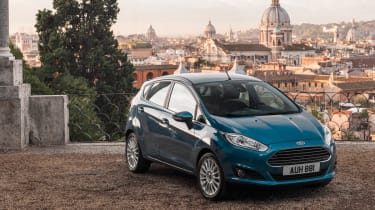 Few superminis can rival the Ford Fiesta for style and street cred. A rakish profile and bold details mean it packs plenty of visual punch – but Ford’s trademark gaping grille looks a little heavy-handed in this case.The Fiesta Style is equally attractive inside, where you’ll find a neatly designed and logically laid-out dashboard. Quality is good, too, with decent fit and finish, plus plenty of soft-touch materials – although some of the plastics used in the lower half of the cabin are a little hard and scratchy. There’s plenty of adjustment on the seat and steering wheel, so it’s easy for drivers to get comfortable.

But while the Ford Fiesta Style gets the innovative MyKey as standard – a system allowing the driver to tailor settings including speed limit reminders and radio volume - Ford shamefully charge an extra £200 for Bluetooth and £100 for a DAB radio – kit you’ll find as standard on many rivals. Other options available include sat-nav for £700, a quickclear windscreen (£100) and a useful adjustable boot load floor for £75.

The Fiesta is as good to drive as it is to look at, and its poised handling and excellent refinement give it a mature feel. The Fiesta Style is powered by a choice of Ford’s proven 1.25-litre petrol unit in either 59bhp and 81bhp forms. And although the engine lacks the overtaking urge of more powerful models, neither detracts from the Fiesta’s desirability.

The diesel models are more efficient than their petrol counterparts – there’s a choice of a new 74bhp 1.5-litre TDCi with an impressive emissions figure of 98g/km, or there’s the super-green Style ECOnetic with its 1.6-litre TDCi which promises economy of 85.6mpg with 85g/km emissions.

The Fiesta Style is fitted with a five-speed manual gearbox – there’s no auto option – and in-gear response is definitely a match for any of the Fiesta’s rivals. This, combined with the excellent ride and decent noise insulation, makes the Fiesta Style a creat city car, as well as one of the best superminis for motorway driving. 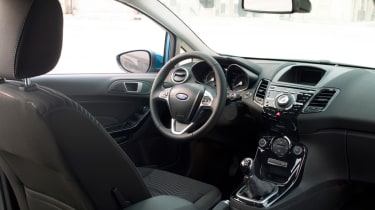 Despite its compact dimensions, the Ford Fiesta Style is a versatile choice, particularly in five-door form. However, it can’t match the clever packaging of roomy MPV-style rivals like the Nissan Note and Honda Jazz.

The Ford Fiesta gets adequate head and legroom for rear passengers, and lots of thought has gone into the interior, where you’ll find plenty of storage cubbies and a number of cup-holders.

The Ford Fiesta also has a slight advantage over its rivals for luggage capacity, thanks to its well-shaped 290-litre boot. Ford fits a useful 60:40 split-folding rear seat as standard across the range although the bench doesn’t fold completely flat.

Ford offers a £550 pre-paid servicing pack, which covers scheduled maintenance for three years or 36,000 miles. And as it’s Britain’s best selling car you should be able to haggle decent deals with your Ford dealer.