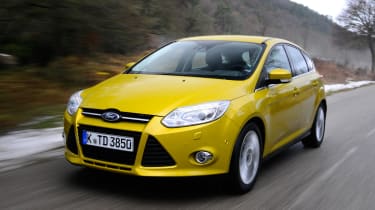 Has Ford got a winner on its hands? Undoubtedly. The Focus really moves the game on in the compact family car class. It packs a huge amount of technology – the most we’ve ever seen on a mainstream hatchback – into a classy and spacious package. It’s hard to say what’s more impressive: the quality of the cabin, the smoothness of the diesel engine or the mature, but still fun, driving experience. Two caveats: it’s not cheap (and you can easily get carried away with the options list), plus we’re still not big fans of the styling. But in every other area, the new Focus is the best in its class.

It’s only January, but Auto Express has already driven the most important new car of 2011! This is the third generation of Ford’s best-selling Focus. And it really is all-new: there’s a new platform, a new look, a host of new gadgets and a super-efficient range of new engines.
First impressions are mixed. In recent years, Ford has become synonymous with strong design – just look at the bold Fiesta and sporty S-MAX. But the latest Focus isn’t particularly daring. In fact, those triangular-shaped details in the front bumper make it appear a little awkward.

Video: watch CarBuyer's video review of the Ford Focus
[[{"type":"media","view_mode":"content_narrow","fid":"68652","attributes":{"alt":"","class":"media-image"}}]]
Up front, finding a decent driving position is easy, as the steering adjusts for reach and rake, while the seat lowers much more than before. In the old car, you always felt you sat too high.
The dash and centre console are taken from the latest C-MAX, and provide a striking mix of modern style, premium quality and neat touches. For example, LED lights glow red around the door handle when you jump in, before changing to a soft pink as you close the door. A dimmer switch above your head adjusts the lighting, which can bathe the cabin in cool purple. This works with soft-touch materials on the facia and a piano black console to put the Focus interior on a par with those of Audi and BMW, certainly on the flagship Titanium X model.
But there are probably more gadgets available than in most prestige German models. A mobile phone-style camera sits just above the rear view mirror, to operate systems which can brake the car automatically in the event of an imminent low-speed shunt and keep you in your motorway lane. It also helps the car perform parallel parking manoeuvres, and recognises road signs and speed limits, and displays them on the dash. Adaptive cruise control and blind spot warning feature, too.
All these toys work brilliantly, but they come at a price. The Driver Assistance Pack (which comprises low-speed crash mitigation, lane keep and blind spot warning) is a £750 option. If you want all the systems, you’re looking at a host of other packs, adding at least an extra £2,500.
And that’s without sat-nav, which starts at £525. Specify 18-inch alloys (£400) and metallic paint (£495), and the cost soon balloons to over £28,000 for a flagship like we drove.
Even so, you have to admire Ford’s ambition: no family car has ever been so capable of stepping on the toes of premium models. The question is, does the driving experience do the same?
Well, technology is a key factor here, too. For the first time, the Focus gets electric power-steering and torque vectoring. The former is more efficient than a regular hydraulic set-up and helps to save fuel, while the latter subtly brakes the driven wheels to mimic a limited-slip differential. Engineers say their goals were to make the car more comfortable than its predecessor, yet just as much fun. And they’ve succeeded.
It feels more grown-up: bumps in the road are ironed out with greater effectiveness by the taut yet compliant set-up, and there’s little in the way of road and wind noise. It’s extremely smooth, and takes lumpy urban streets and motorways alike in its stride.
What’s more, the Focus is still a great driver’s car. An updated ESP system, as well as wider front and rear tracks, ensures it tackles corners with relish. Although the all-electric steering isn’t as sharp, it suffers none of the kickback through the wheel that blighted the old car, and the responses are so linear, smooth and accurate that it’s a pleasure to use.
Turn into a corner too fast and lift off the throttle, and the back end won’t step out. Instead, the car just tightens its line in a safe yet still entertaining manner. Interestingly, the ESP can’t be turned off, but the biggest compliment you can pay the set-up is that you don’t notice it functioning most of the time.
Working in tandem with torque vectoring, the system gives great traction. Our 161bhp 2.0 TDCi had 340Nm of torque, and although the French roads we drove on were greasy, wheelspin or torque steer weren’t an issue. The Focus just gripped and fired its way out of every bend without drama.
The engine is a gem. It’s punchy from low revs and really flexible for rapid overtaking, and propels the car from 0-62mph in 8.9 seconds. Standard stop-start helps it return 53.3mpg economy, while 139g/km emissions mean an annual road tax bill of £110.
Our car came with Ford’s Powershift dual-clutch gearbox. In automatic mode, it’s smooth, but the only way to change ratios manually is to use the awkward up/down buttons on the lever. These aren’t as logical as a set of paddleshifters, which also enable drivers to keep their hands on the steering wheel.
But this is a minor gripe on an impressive, if pricey, package. It will be interesting to see how the lesser variants compare – we’ll try one in the coming weeks – but our top-spec model proves the Focus still makes sense for UK buyers.
Share this on TwitterShare this on FacebookEmail