The new 247bhp Ford Focus ST has already impressed, but is it as good on UK roads? 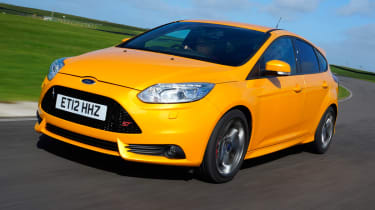 The Focus ST is not the fastest, sharpest-handling, or best-looking hot hatch. None of that matters, though. For most people, most of the time, it’s the most fun hot hatch currently on sale. And with prices from less than £22,000 for the base model – which has all the equipment you really need – the ST is without doubt the best-value performance car you can buy.

We've already driven, and fallen in love with, the Ford Focus ST, but it’s not until now that we’ve had a chance to test a right-hand-drive, UK-spec car.

On first impressions, things don’t get off to that great a start. Its predecessor had one rather compelling USP that the new car doesn’t: it had five cylinders while its rivals all made do with four.

However, in the search for greater efficiency, the 2.5-litre engine has been ditched in favour of a 2.0-litre EcoBoost turbo from the Mondeo.

Another thing going against the Focus ST is that, unlike the immense Renaultsport Megane – the fastest front-wheel-drive production car round Germany’s demanding Nürburgring track – it doesn’t have independent steering axis geometry to reduce torque steer, nor a limited-slip differential for improved traction. It relies on cheaper electronics to achieve similar effects.

Then there are the looks. The ST is a hot hatch that’s only available as a five-door or an estate. Plus, the design of the current Focus is an acquired taste at best, and adding that huge black grille and some spoilers doesn’t make it any prettier. As for our test car’s £745 optional Tangerine Scream paint? Well, it’s enough to make you pull a face like the subject of an Edvard Munch painting.

But all this is forgotten the moment you’re inside. As you slide into the comfortable Recaro sports seats, they give your body a reassuring hug. Then you prod the starter button, floor the throttle and you know that everything will be all right.

Somehow, from the driver’s seat, Ford has managed to make the four-cylinder engine sound as good as the old five-cylinder. Also music to our ears are the ST’s impressive fuel economy and emissions figures.

In reality, though, you’ll do well to get anywhere near the claimed 39mpg, because the addictively punchy performance of the engine means it warrants a regular thrashing.

Indeed, the power delivery is such a delight you don’t really mind that the steering wheel squirms slightly under hard acceleration, especially as the electrically assisted rack is fast, responsive and packs in more feel than its rivals.

Neither does it matter that, for all its torque vectoring wizardry, the ST doesn’t possess the hooked-up traction of the hot Megane. Because while the Renault corners harder and faster, out on the road the Focus offers more fun.

Part of the reason for this is the more supple suspension. It makes the car more comfortable for everyday driving, and the way it glides over bumps along a twisty back road gives you the sense that you could be flying. What’s really addictive about the Focus, though, is its slightly loose and playful feel.

In fact, other manufacturers could learn a lot from the ST. It reminds you what makes a great real-world hot hatch, and that a good lap time at the Nürburgring really isn’t everything.