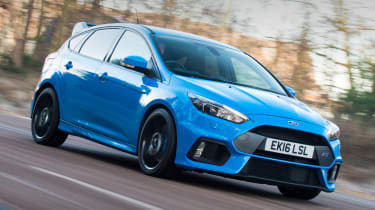 Fast Ford models have always had a reputation for delivering thrilling driving dynamics, but the RS engineers have pulled out all the stops with this Focus. As a result, it’s the first high performance Ford to feature four-wheel drive since the legendary Escort RS Cosworth. Yet unlike the fairly agricultural system fitted to its ancestor, the Focus’ transmission is packed with cutting-edge kit.

At the heart of the set-up is what the company terms its Rear Drive Unit, which can send up to 70 per cent of the engine’s torque to the rear axle, then up to 100 per cent of this power to an individual rear wheel. In effect, Ford has engineered in a torque vectoring facility that aims to combine the stability and traction of an all-wheel-drive car with the adjustability and agility of a traditional rear-driven machine.

• A history of Ford's RS brand

In addition Ford has ditched the Focus ST’s variable ratio steering rack in favour of fixed rate set-up that promises even more consistent responses and greater feedback. Also included are two stage adaptive dampers, plus a Drive Mode that allows you to choose from Normal, Sport, Drift and Track modes. 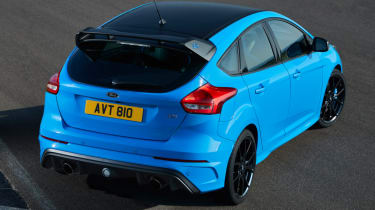 On the road, this hi-tech cocktail results in one of the most exciting hot hatch driving experiences.

As you’d expect, there’s bags of grip, and the Focus turns eagerly into corners and stays locked on your chosen line. The steering is quick, well weighted and packed with decent feedback, while selecting the sportier driving modes adds a little extra weight – although it doesn’t really need it.

Despite the sharpness of the steering, it’s the four-wheel-drive system that really impresses. Even in Normal mode, the rear differential sends significant torque to the outside rear wheel, helping to point the nose of the RS into the bend. Go for the Sport setting and the effect is even more pronounced. In wet and slippery conditions you’ll even get a delicious flick of oversteer when you apply the power.

The Brembo brakes also deserve special mention. Not only are they powerful, but they’re easy to modulate thanks to the progressive action of the well-weighted pedal. 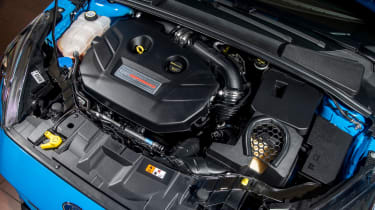 Then there’s the exciting sounding Drift setting. Prod a button on the transmission tunnel, and the four-wheel drive system is primed to deliver controlled and graceful sideways slides without the risk of spinning. However, in reality this addition is a bit of a gimmick, especially for drivers more used to a traditional rear-wheel drive layout. Initially the rear wheels spin to push the rear of the car round, but soon power is delivered to the front axle as the electronics attempt to pull the car straight. It’s okay for a bit of show-boating in wide-open spaces, but ultimately rather unsatisfying.

When you’re not playing the hooligan, the RS is pretty much an ordinary Focus, which means it’s easy to drive and fairly refined. The pedals and steering are reasonably light, while the gearbox has an easy and precise action. Only the firm ride lets the car down.

Even with the standard adaptive dampers in their 'Normal' setting the Focus fidgets and follows almost every bump in the road - although it's no worse than a Fiesta ST in this respect. The RS is firm even in standard mode, but the high-quality damping takes the edge off bumps beautifully. Sport suspension mode is firmer still, and on anything other than smooth roads the RS pogos. It’s never overly harsh, though.

The Focus RS is a standalone model, so there’s only one engine choice - but it’s a corker. Based on the turbocharged 2.3-litre four-cylinder engine already seen in the Ford Mustang, it features a number of tweaks that push power and torque up to 345bhp and 440Nm respectively. Technical highlights include a separate oil cooler, a larger turbocharger, a high capacity radiator and a large bore exhaust. Fans of older fast Fords will also be heartened to discover that British tuning specialist Cosworth produces the unique aluminium cylinder head.

As you’d expect, performance is impressive, with the RS demolishing the benchmark 0-62mph sprint in a claimed 4.7 seconds. However, when we tested the car we recorded a 0-60mph time of 5.0 seconds. This figure is achieved in conjunction with the standard launch control, which automatically holds the engine revs at the perfect point for a the fastest getaway. This system is effective but brutal, and it's likely the frequent use will put a lot of strain on the clutch and transmission. 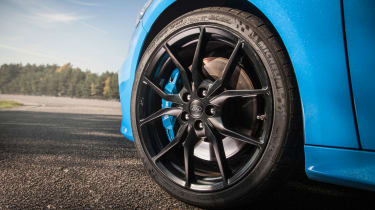 Yet on the road it’s the car’s mid-range muscle that really impresses. Once the revs climb past 2,000rpm the Focus simply flies. There’s virtually no turbo lag and the engine responds crisply to the throttle. The slick six-speed manual also allows you to make the most of the considerable performance.

The 2.3-litre unit sounds good, too. A valve in the twin exit exhausts opens at higher revs, boosting gas flow rate and adding a hard edged growl to the soundtrack. Lift off the throttle and you treated to a barrage of pops, crackles and bangs on the overrun. It’s not quite as charismatic as the Audi RS 3’s five-cylinder unit, but it’s not far off.

Want more power? You can ship your RS off to Ford specialist Mountune, which will boost power to 370bhp for about £900. The upgrades include a free-flowing air filter and a bespoke ECU map, as well as a new recirculation valve. What's more, it's a Ford-approved modification, so it doesn't affect the car's warranty.

Alongside the Cosworth-developed 2.3-litre four-cylinder turbo unit’s 370bhp, the Mountune has 510Nm of torque on overboost, which really starts hitting at just over 2,000rpm. There’s a soft edge to the throttle response as the turbo gets up to speed, but once it’s boosting, the performance is savage.

The difference is difficult to notice in any one area as the upgrades have been so well calibrated, but in-gear performance figures we recorded show it’s a match for the Mercedes-AMG A 45, accelerating between 50-70mph in sixth in 5.3 seconds. 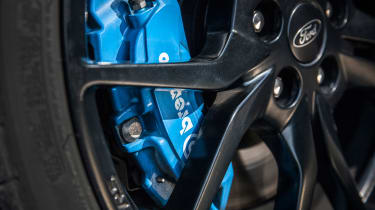 Unfortunately, due to drizzly conditions during our test runs, the RS only managed to sprint from 0-60mph in 4.9 seconds; Ford claims an official time of 4.5 seconds for the upgraded car. New turbo pipework releases a few more whooshes from under the bonnet of the Mountune RS, while the exhaust still snarls. There’s not much point revving the engine beyond 5,500rpm, though; change up here and drop it back into the torque band.