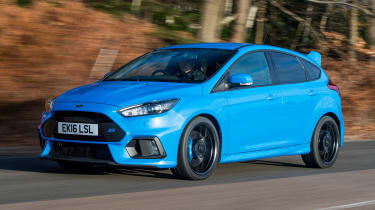 With the FPM375 kit, the Focus RS is an even bigger performance bargain. For £899 it takes the fast Ford into the league of hyper hatchbacks, rivalling the likes of the Mercedes-AMG A 45 for around £8,500 less. The RS’s chassis can easily cope with the extra power and still delivers grip, poise and engagement – but without any compromise to the car’s warranty.

Just as it applied its know-how to the Fiesta ST and Focus ST to great effect – extracting a few more horsepower for not a lot more cash – now tuning firm Mountune has turned its attention to the most hardcore fast Ford on sale, the Focus RS.

Not that the standard car necessarily needed more power, but the addition of a high-flow induction kit, updated recirculation valve and bespoke ECU remap has liberated another 25bhp. That takes the 2.3-litre four-cylinder turbo’s output to 370bhp.

The Ford Performance by Mountune FPM375 kit costs £899 including VAT, and should take around one and a half hours to fit. It doesn’t affect the standard Focus warranty, and the upgrade can be made retrospectively to existing cars. 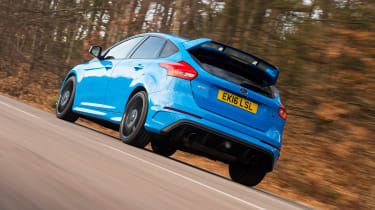 In addition to the extra power, torque has been tweaked from 470Nm on overboost to 510Nm – which is more than a Porsche 911 Carrera S delivers. The extra grunt drops the RS’s 0-62mph time to 4.5 seconds – helped by standard launch control. This is now a seriously fast car.

Tread on the throttle at anything more than 2,000rpm and the engine picks up with a vicious snarl. There’s a momentary pause as the turbo wakes up, but it almost adds to the sensation of speed as the full hit of torque is delivered explosively.

The performance upgrades have been so well developed and applied that it’s difficult to notice the extra urgency in any one place in the rev range. But there’s no denying the Mountune RS is bonkers fast. 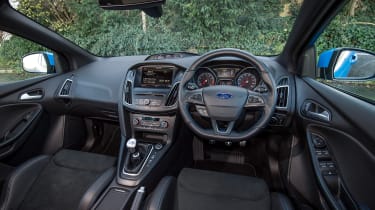 On rough roads there’s a gentle sense of torque steer under hard acceleration, while the aggressive geometry means the steering does sniff out cambers. The Focus RS needs some guidance as a result, but it’s all part of the fun. As the revs rise the deep growl morphs into a whoosh, and the Mountune-developed pipework feeding the intake releases a few more flutters from the turbo.

There’s not much point in revving the engine beyond 6,500rpm. Instead, make the most of the light but sweet six-speed manual gearbox by shifting up and dropping the engine back into its torque band. The tight, staccato cracks from the exhaust make this especially addictive.

Driving on the road this comes naturally, allowing you to lean on the four-wheel-drive system to punch the car between corners – playing to the upgraded RS’s strengths. Traction is fantastic. The Focus can send up to 70 per cent of its torque to the rear axle, with a trick rear diff that can then distribute all of this to just one wheel when the RS’s Drift mode is selected. Exit a corner on full throttle, trust the system, and the Focus will tighten its line and indulge in a slide as the tail arcs round.

As before, there are Normal, Sport and Track driving modes which change the calibration for the four-wheel-drive system and sharpen throttle response, although the RS’s no-nonsense approach means that even in Normal mode the Focus is firm and uncompromising. However, while it is stiff, the finesse to the body control is impressive. It doesn’t crash over anything but the worst surfaces, with the dampers just taking the knobbly edges off harsher bumps.

Adaptive dampers are standard, so you can ramp the chassis up another notch by selecting the firmer suspension mode. It’s even more tightly controlled in this setting and does tend to pogo, but it’s no firmer than a Honda Civic Type R in its hardest mode. 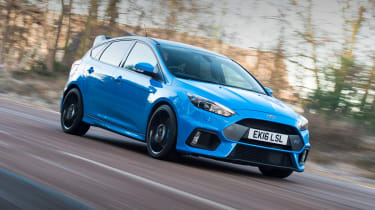 Increase your speed, and the energy going through the chassis, and the RS starts to make more sense, but you’d want to be on a smooth road or track to make the most of the car’s ability to corner with barely any roll.

There are some drawbacks, although these don’t centre on the Mountune upgrades. The Brembo brakes are a little too sensitive at lower speeds, but feel more at home being used hard, reinforcing the Focus’s character. The steering is accurate and geared to make the most of the high level of grip on offer, but lock is limited, so parking can be a pain.

As this is a hot hatch that many buyers will use as their only car, things like this matter. However, owners shouldn’t have to compromise on efficiency, because the Mountune-equipped Focus has the same economy and emissions as the standard car, claiming 36.7mpg and 175g/km of CO2.