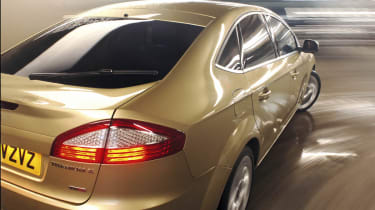 No matter which model you choose, Ford’s new Mondeo is a sound choice for any family car buyer. In Durashift diesel form, it offers the best compromise between long-distance economy and lazy town driving. However, it demands several compromises. The gearbox is not as rewarding as the standard manual for keen drivers, and it numbs both efficiency and performance. But if you want the most relaxing Mondeo on offer, this could be it.

Walk into a Ford showroom, and you can be sure of one thing – there will be a car to suit all tastes. Thanks to the scale of the firm’s sales, it can deliver hundreds of different engine, trim and gearbox combinations for every model it offers.

Despite efforts to simplify the line-up of recent launches, there’s still a raft of variants of the latest Mondeo to choose from. A popular combination in the executive car class is the diesel automatic – but does it work in the family favourite?

Turn the key, and the smooth 2.0-litre TDCi diesel engine immediately impresses with its smooth refinement. On the move it’s just as quiet, but the Durashift automatic transmission does little to help hide the diesel clatter which is audible at high revs.

While the shifts are reasonably smooth, the gearbox holds on to the ratios for too long before changing up. However, once up to motorway speeds the transmission is faultless, and really takes the stress out of long-distance cruising.

As you would expect, the auto box reduces fuel efficiency, but the 39.8mpg combined economy is still impressive. However, go for the manual, and that rises to 47.9mpg.

There are similar sacrifices to make with performance. Few will have any real complaints with the auto’s 10.6-second 0-60mph time, but the cheaper manual takes only 9.2 seconds.

In all other ways, the Mondeo is as polished as ever. While we would avoid the stiff £150 optional Sports suspension, the car’s handling agility is second to none in its class.

Priced at £22,945, the top-spec five-door auto costs £1,100 more than the manual car, but at 128bhp has 10bhp less. And if you want to match the plush specification of this model, the total rises to an eye-watering £27,860. With less impressive economy, performance and refine- ment, that could be a bitter pill for many potential buyers to swallow.

Rival: VW Passat DSG Rather than a conventional auto, VW’s self-shifter uses a clutchless manual set-up. It’s not as smooth as the Ford at low speeds, but does offer greater control.