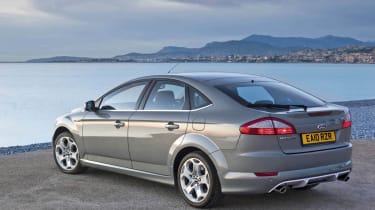 When it comes to Ford's petrol engine line-up, smaller more efficient turbocharged units are the future – whether it’s a Focus, C-MAX or as tested here, a Mondeo. Its 2.0-litre EcoBoost unit offers real driver appeal, with smooth and punchy performance, but crucially running costs that are surprisingly low too. Factor in the slick Powershift dual-clutch gearbox and it makes for a strong combination. The only flies in the ointment are a high price tag and the fact that given most buyers will be company car drivers, a diesel is still the better option

MEET the hot Mondeo that seeks to prove smaller really is better. Replacing the outgoing 2.5-litre five-cylinder engine in Ford’s family favourite is a new flagship 200bhp 2.0-litre turbocharged four-cylinder EcoBoost unit. We were impressed by the petrol powerplant in the S-MAX SCTi, but how does it compare in the lighter, sportier Mondeo?

Featuring variable valve timing and direct injection, the Blue Oval claims the new engine offers the performance of a V6 with the fuel consumption of a 1.6-litre four-cylinder. And it certainly backs up those bold claims. Hooked up to Ford’s smooth six-speed dual-clutch Powershift automatic gearbox as standard, the SCTi unit offers strong thrust from low revs thanks to 300Nm of torque, accelerating from 0-62mph in 7.9 seconds and onto a top speed of 144mph. But unlike its thirsty five-cylinder predecessor, that pace doesn’t come at the expense of fuel efficiency.

The EcoBoost engine returns almost 37mpg on the combined cycle and emits 179g/km of CO2 for an annual road tax bill of £200. More importantly given that most sales will be to company car drivers it sits in the 25 per cent tax band. By comparison the old 2.5-litre unit emitted 222g/km and would have burdened business owners with a hefty 34 per cent rating.

It’s a lovely engine and gearbox to live with too. There’s lots of shove in the mid-range and the dual clutch gearbox is cleverly matched to the engine’s characteristics. It works brilliantly in automatic mode, shifting down when needed and holding on to the right gear during overtaking. You can even take control yourself by selecting Sport mode, pulling the gearlever back to shift up and forward to shift down.

Factor in sharp steering, great body control and a firm but well-damped ride and the Mondeo EcoBoost is as good in the corners as it is in a straight line. Impressive though the newcomer is, it is still difficult to see buyers – either private or business – ignoring the other new additon to the Mondeo engine range: a 163bhp 2.0-litre TDCI diesel.

Offering fuel economy of 53.2mpg and CO2 emissions of 139g/km, it’s likely to account for the majority of sales. But this new EcoBoost engine does have much to offer and proves that petrol has a definite place in the line-up.