Revised Vauxhall Insignia hopes to regain the edge in the family saloon class. Can it beat Ford’s evergreen Mondeo? 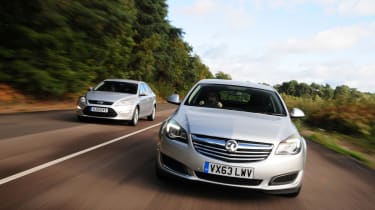 Sales of traditional five-door hatches have taken a battering of late. Family buyers have turned their back on the class in favour of practical SUVs, while company and fleet users have migrated upmarket to the compact executive sector.

This means models such as the Insignia have struggled to make an impact on the sales charts. However, rather than roll over and give up, Vauxhall’s updated the car with a fresh look, more kit, lower emissions and competitive pricing. Here, we try the 2.0 CDTi Design Nav in clean ecoFLEX guise – and we’ve pitched it against its arch rival, the Mondeo.

The big Ford is getting on a bit. It’s due to be replaced next year, but in the meantime a range of great-value Business Edition models has been launched. We try the Zetec version, powered by Ford’s cleanest diesel: the 1.6-litre TDCi ECOnetic.

These rivals have always fought a close battle, but can the updates give the Insignia the edge?

These cars are designed to be relaxing motorway cruisers, and this is where the Insignia excels. It has a more comfortable ride than the Mondeo, even with our car’s optional 18-inch wheels, and it’s quieter, too, with less engine noise in the cabin. The powerful diesel doesn’t need to be worked as hard as the Ford’s smaller engine, which helps economy, while the 70-litre fuel tank gives a range of nearly 800 miles.

A cleaner engine puts the Insignia ahead for company car tax. It falls into the 14 per cent bracket, and higher-rate earners will face an annual bill of £1,108. This is £350 less than for the Ford, which sits in the 17 per cent tax band.

Although sat-nav and climate control are included on both of these cars, there are some glaring omissions from the Insignia’s kit list. For example, you only get wind-up windows in the back (powered operation is an optional extra, at £170), while front and rear parking sensors will set you back a further £395. However, as there’s a £1,646 difference in list price between the two cars, you can specify these options and still come in well under the Mondeo’s asking price.

The facelifted Insignia marks a new start for Vauxhall’s family car. Updated engines, a revised interior and a new pricing strategy aim to revive its fortunes in this hard-fought market. As before, it’s available as a hatchback, saloon or Sports Tourer estate, with a long list of trim levels available.

In this first test of the revised Insignia, we try the entry-level Design with satellite navigation. It’s powered by the most efficient engine in the range – the 138bhp 2.0 CDTi ecoFLEX – which emits 98g/km of CO2. It’s not as entertaining to drive as the Mondeo, but in terms of comfort, style, emissions, performance and value, the Insignia is very attractive.

While the touchpad controller takes some getting used to, and the touchscreen is arguably better to use, the slightly superior kit list and extended options earn the car victory.

It’s the old-stager in the hatchback class, but the Mondeo still has plenty going for it. Ford has consistently refreshed the car, and the last round of updates earlier this year saw the introduction of two new Business Edition models that maximise the amount of equipment you get for your cash.

Further up the range is the Titanium version, but here we’ve lined up the Zetec Business Edition because it has similar kit to the Insignia, while the 1.6-litre TDCi is the closest engine for emissions. But still, there’s no getting away from the fact that the Mondeo is an old car. The interior is the biggest giveaway, with its blocky displays, hard plastics and dated switchgear.

Add poor emissions and performance, and the sharp driving dynamics and big discounts can’t make up for the Ford’s shortcomings.