The Ford Ranger is the 2020 Auto Express Pick-up of the Year, with the Mitsubishi L200 and Toyota Hilux commended 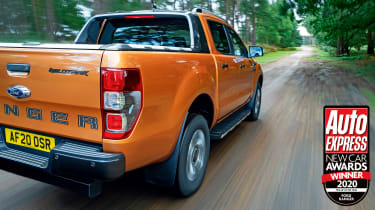 Our pick-up class has been won for the second year in a row by the UK’s best-seller. In fact, the Ford Ranger doesn’t simply top the category, it dominates, and for very good reasons. It strikes a great balance between workhorse dependability and everyday comfort, because Ford has cherry-picked some of the best bits of its passenger car line-up to give the Ranger the kind of tech and quality that most rivals struggle to match.

A major update in 2019 gave it a winning edge over its rivals, and it’s an advantage that it still maintains. Whether you’re choosing the utilitarian XL or a top-spec Wildtrak, you’re getting a truck that can cope with everything you throw at it, with enough space, payload and towing ability to tackle the tough jobs.

All models use Ford’s 2.0-litre EcoBlue diesel, with a choice of two power outputs, and both have the torque and selectable four-wheel drive to cope with the toughest terrain.

Yet if you choose a four-door double-cab Wildtrak or Limited model – or one of the special editions, such as the recently launched Ranger Thunder – then you’re getting a well equipped family 4x4, too. 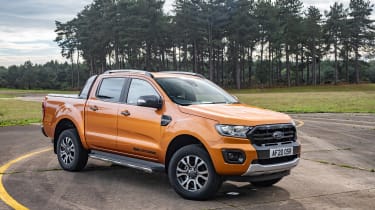 There’s space inside for five, lots of plush materials, and the SYNC 3 multimedia system is the same as that found in the Focus and Fiesta. The good news doesn’t end there, because the Ranger is a comfortable cruiser, too. Ford has done a great job tuning the suspension, and found the sweet spot between being able to cope with a one-tonne payload and still delivering near-SUV levels of ride comfort.

Ford even has you covered if you want a performance truck. While the F-150 Raptor is a hit in the US, it’s simply too big to be usable on this side of the Atlantic. So instead we get its (relatively) pint-sized alternative, the Ranger Raptor. Although it uses the same 210bhp 2.0-litre diesel and Mustang-sourced 10-speed auto box found in other high-spec Rangers, the Raptor’s bespoke Fox suspension means it can cover rough ground faster than almost any SUV, delivering a unique performance-car experience in the process.

The Raptor turns the most heads, but a mid-spec Ranger Limited will get you all the kit you really need, and the higher-spec diesel offers effortless power. If you run a Ranger as a company vehicle, then you can take advantage of commercial vehicle tax rates, too. 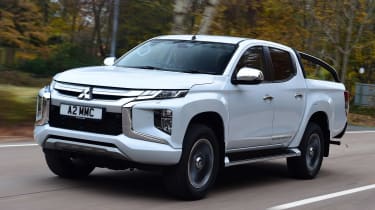 An all-new L200 arrived towards the end of 2019, and it builds on the excellent qualities of its predecessor. A bold new front end helps it to stand out from the crowd, while the combination of workhorse reliability with plush materials on the well equipped top-spec variants means it’s still a top contender. 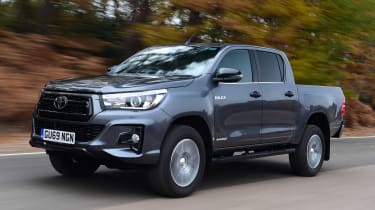 It’s a staple of the Toyota line-up, and constant evolution has helped the Hilux keep its place near the front of the pick-up truck pack. Its world-renowned reliability means it should be on any potential shortlist, while improvements to Toyota’s passenger car tech have made their way to this commercial vehicle colossus.