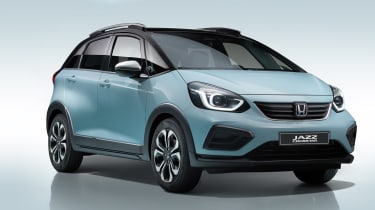 Honda has confirmed it will electrify all of its mainstream models by 2022, in a bid to meet European emissions regulations. Over the next 36 months, the Japanese manufacturer will launch six electrified cars, one of which will be the next-generation Honda Jazz, which was revealed at this year’s Tokyo Motor Show.

Honda has officially announced four of its six planned electrified vehicles. The list currently includes new hybrid versions of the HR-V and Civic, the hybrid-only fourth-generation Jazz and the all-electric Honda e. The Japanese firm will also launch a new electric car and an all-new SUV, but the specifics of these vehicles are yet to be confirmed.

Tom Gardner, Senior Vice President of Honda Motor Europe, said: “This shift to electrification will change the face of our model line-up considerably. Our two-motor hybrid technology will be spread across the model range and we will bring further battery electric product to the market.”

The 2020 Honda Jazz will spearhead the firm’s push towards hybrid drive. Unlike a conventional hybrid, where the electric motor assists the combustion engine, the Jazz’s petrol engine acts a range-extender, generating electricity for the motor. Honda says this approach improves both economy and refinement.

Honda’s shift towards electrification in Europe will arrive three years earlier than the firm originally planned, due to the speed at which European emissions regulations are being updated, the improved consumer attitude towards all-electric motoring and the confidence the company has in its latest all-electric and hybrid powertrains.

What do you make of Honda’s push towards electrification? Let us know in the comments section below…