Not so long ago, cars that drove themselves were the stuff of Hollywood fantasy - but not any more. 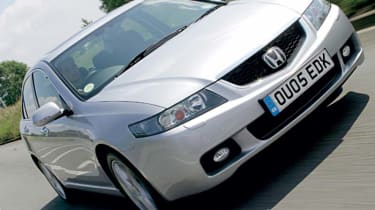 Honda prides itself on being one of the world's most advanced car makers - and ADAS proves it's right to do so. While the cruise control still needs refining, the lane departure warning is superb and really makes driving easier and safer. Bosses just need to make this option available further down the range now.

Not so long ago, cars that drove themselves were the stuff of Hollywood fantasy - but not any more. Next year, you will be able to buy a regular family saloon capable of performing Herbie-like tricks without the help of special effects.

Meet ADAS: Honda's Advanced Driver Assistance System. Consisting of two active safety devices - Adaptive Cruise Control (ACC) and a Lane Keeping Assist System (LKAS) - it will be optional on the revised Accord, due in the spring.

It's claimed the set-up will make high-speed motoring much safer and easier - and Auto Express took the wheel of a specially equipped 2005 model-year Accord to see what's on offer.

We didn't take long to realise the hype is justified - LKAS is a big step towards a vehicle that drives itself. Designed to stop motorists falling asleep at the wheel, it uses a camera by the rear view mirror to monitor white lines either side of the car on motorways and A-roads.

Cross the lines without indicating and a warning beep is emitted. But the really clever part is that, if the driver's hands are on the wheel through a long bend, LKAS turns automatically, keeping the car in its lane. It sends signals to the power-steering, which then moves the wheel. The result is remarkable. It's strange to feel the steering turn itself, but motorway driving becomes more relaxing, as the camera reacts faster than the human eye to minor changes in road curvature, setting the car up for corners with slight steering angles.

So it's a pity Honda's adaptive cruise control isn't up to the same standard. As with BMW, Mercedes and Nissan systems, it uses radar to maintain a set distance from the car ahead, automatically accelerating or decelerating, and even applying the brakes.

But as in rivals, progress can be jerky. Where most drivers would lift off if a slow-moving vehicle appeared in the distance, ACC maintains speed until that car comes into range, then applies the anchors. Nor will it save you from an impending crash, as the system requires the driver to take over in an emergency, limiting braking force to 0.3g.

However, ACC does offer increased safety over conventional cruise control. How much the entire ADAS option will cost is still unknown, but we would estimate £1,000. For high-mileage drivers, it makes a lot of sense and could mean the difference between life and death.