The facelifted Honda Accord can now drive itself, so Auto Express put it to the test on a motorway during rush hour 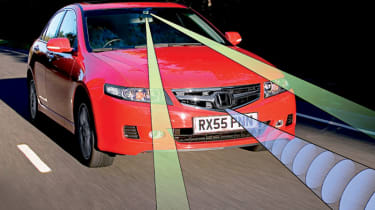 Visual tweaks and extra equipment add appeal to the Accord, while ADAS is a unique feature. It's easy to dismiss Honda's latest technology as an expensive gimmick or a risky toy. However, it works well in practice and drivers who cover high mileages are sure to notice the benefits. The trouble is, they are likely to be more interested in the diesel Accord, which isn't available with this clever set-up.

There's something in the air at Honda. While the advertising team has been coming up with brilliant and bizarre promotions, from the gravity-defying Cog to the recent car-aping choir, the engineers are being equally adventurous. They have launched the world's first self-driving production model!

The system is already on sale in Japan and, as we use the same right-hand-drive layout, British buyers are the first in Europe to get the new technology - albeit only on the flagship 2.4-litre petrol model. Visual alterations to the revised Accord have been kept to a minimum, with reshaped bumpers and a more prominent grille. Improved trim and clearer instruments feature inside, but it's the changes under the skin that are making the headlines

A production-model first, LKAS is designed to reduce driver fatigue on motorway journeys. It operates only at speeds over 45mph and uses a camera, mounted beside the rear view mirror, to detect painted white lane markings. The car's power-steering then provides corrections to keep it on course.

To stop motorists from abusing the set-up - using their daily commute to read the paper, put on make-up or have a shave - the Japanese firm has included a number of safeguards. If you take your hands off the wheel for more than 10 seconds there is a warning beep and a visual reminder in the dash, then the LKAS deactivates. To restart, replace your hands on the wheel.

In practice, the system works well and, combined with the adaptive cruise, driving in heavy traffic is less stressful. You still have to concentrate, but you can spend more time looking ahead than observing your immediate surroundings.

Try to cross into another lane without indicating and you can feel the car attempting to maintain the correct course. Yet little effort is required to overcome the computer's inputs, so the system doesn't dictate to you.

However, the set-up doesn't work in torrential rain and won't recognise the temporary luminous lane markings used at major roadworks. Bends with a radius of less than 200m are too tight for the system to deal with, so you need to be alert at all times.

Used properly - by maintaining full concentration and driving normally - it is an effective, if expensive, tool.