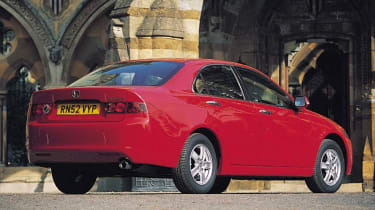 In 2002, Honda's new seventh-generation Accord intentionally moved upmarket. The car was no longer a direct rival for mainstream Ford Mondeos - the maker preferred to see it as an opponent to the BMW 3-Series. Prices were higher and sales targets lower than before, partly because of limited availability from the Japanese factory. But the approach worked well. With residuals equal to the BMW's, the Accord is proving its worth as a used buy. The car is in short supply, so even 18-month-old dealer demos fetch top money. We've also looked at the Accord's reliability record, and so far have heard of no major faults, which bodes well for the model's future. The 2.2-litre i-CTDi diesel didn't arrive until February 2004, but instantly became the Accord of choice. As a result, the few that are available second-hand sell at a premium. But it's a used car that's worth the money, and as it will never be a huge volume player, expect demand for the Honda to remain strong.Checklist * Engine: the engines are totally reliable, but check for a full service history and evidence of hard use; they respond well to being properly run in, and not thrashed. * Stereo: reports of problems with traffic broadcast function on some systems. It can stick on, interrupting programmes and CDs at times. Honda will rectify the fault. * Body: model range is limited - with variations mainly in wheels, trim and stereo. The 2.0 has different gearing and tyres, while the base SE is super-frugal, with 38mpg. * Panels: there are no side rubbing strips, and flat panels show dings very clearly. Costing at least £50 per mark to fix, it's worth running an eye along the flanks. * Wheels: flagship models available with striking 17in alloys. Check them carefully for signs of kerbing, as they are expensive to replace. New tyres prove costly too, so check the state of front rubber.Driving impressions The Accord is sporty to drive, with ultra-smooth petrol engines delivering low-speed grunt and high-rev punch. It corners confidently and accurately, with well weighted, accurate steering, while the manual gearchange is a delight. Refinement is impressive, but rear visibility can make parking tricky. The diesel car is as smooth as the petrol, and it's seen as the best in the range.Glass's View The Accord has gained a reputation for quality, generous kit and good ride and handling. More importantly however, it has some of the strongest residuals for any car in its sector. The Honda has never really suffered from oversupply, and current levels of stocks are enough to meet demand. High-spec models such as Executive are the most sought after. The diesel version is also a popular choice, but used examples are in relatively short supply. An excellent used car choice. Jeff Paterson, senior editor, Glass's GuideLife With An Accord The most reliable and comfortable car l have owned. My only complaint is the restriction in the opening for load carrying when the back seats are folded down. John Windett, Lytham, Lancashire Very good value for money. I have found the Accord to be highly accomplished in nearly every area. The only thing that has proved to be a little disappointing is the quality of the paintwork. Adam Booker, Bognor Regis, West Sussex

Bigger, more luxurious and more powerful than before, the Accord promises a lot, moving upmarket a notch compared to mainstream rivals. While there's no Type R, all is not lost for keen drivers. Honda wanted this Accord to be sportier, and has revised the previous car's impressive wishbone suspension. Improvements in body stiffness also offer greater steering feel and a better ride. Extra soundproofing means the car is hushed inside, and safety isn't forgotten, either.