The new Honda Civic Type R promises high-performance fun in a practical package, but so does the Ford Focus RS. Which is better? 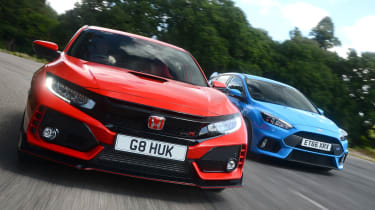 If you’re a hot-hatch fan, you will be no stranger to Type R. Honda’s high-performance badge has graced some of the most focused hatchbacks ever – and now the Civic is in its 10th generation, the Japanese brand has once again given it the Type R treatment.

This means the car is now square in the sights of the hot hatch that’s left a trail of fast family five-doors in its wake: the Ford Focus RS. Both models use four-cylinder turbos and six-speed manual gearboxes, making them two of the most overtly sporty cars on sale today; just look at their muscular styling and aggressive stances. 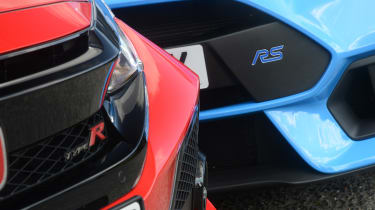 There’s only £730 difference between these two challengers’ list prices, too. However, one major point divides them: while the newcomer from Honda is front-wheel drive, the Ford is four-wheel drive.

These cars cater for the same market and offer hardcore driving thrills alongside enough practicality to make them usable day-to-day propositions. But which has the broader range of ability to take the honours as our hot-hatch champion? 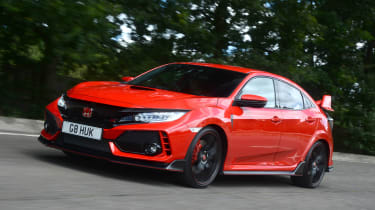 The previous Civic Type R was on sale for only two years before Honda went back to the drawing board and came up with this new, ultra-hot version of the 10th-generation Civic. The latest car comes in two flavours: standard and the £32,995 GT we’re testing here, which gets more equipment.

VTEC works alongside the turbo here to boost low-end performance, and there’s plenty of muscle on offer. While the 400Nm of torque is some way down on the Ford’s 470Nm on overboost, the Civic weighs only 1,380kg next to the 1,524kg Focus RS.

Despite a limited-slip diff, the Type R struggles for traction off the line, covering 0-60mph in six seconds flat on test. But this was still a second slower than the more powerful, four-wheel-drive Ford, which has launch control to manage slip from a standstill. 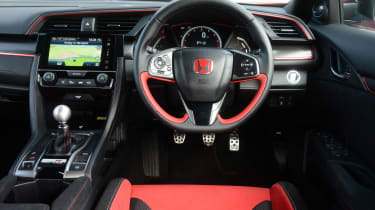 The cars are much more evenly matched once the wheels are turning, however. On test, 30-70mph took 4.3 seconds in both models, and the Honda was two-tenths faster from 30-50mph in third gear than the Ford, taking only 2.2 seconds. The Civic also hit the rev limiter in second just before 60mph, so the figures don’t tell the whole story. In-gear performance is exhilarating, with a wonderful blast of torque through the mid-range that gives a greater sensation of speed than the Ford’s more linear power delivery.

Where the Honda really takes off is with its breadth of ability. In Comfort mode the ride is significantly more compliant than the Ford’s equivalent setting, but you can dial it up by switching to Sport mode if you’re on the road, or +R on track. Both of these settings sharpen up the Honda into something truly special; the steering is precise and there’s an incredible amount of grip through bends. While the Ford is great fun, mastering the Civic’s razor-sharp chassis will engage and delight drivers even more. 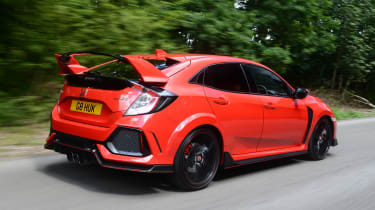 Fast Hondas are also known for their gearchange action, and this one is no exception to the rule. It has a short, mechanical shift, with a superb position in the cabin that adds a sense of fun to any journey.

Testers’ notes: “You wouldn’t call the Civic attractive, but its pugnacious stance is backed up by a genuinely brilliant drive. It’s much more usable and better engineered than the car it replaces.” 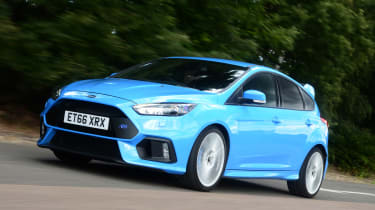 The Ford Focus RS boasts more power than the Honda and is slightly cheaper, but how a car feels and how usable it is can be as important as outright firepower with models such as these. So does the £32,265 Focus RS have what it takes to overcome the Civic Type R’s challenge?

That overboost function allows the Focus to boast brawnier figures than the Civic. But the extra weight means that, in reality, on the road there’s not much difference in performance. At our track the launch control and four-wheel drive meant the Ford was quicker off the line from 0-60mph, taking 5.0 seconds. This was untouchable for the Honda, yet there’s more to this battle than straight-line speed. 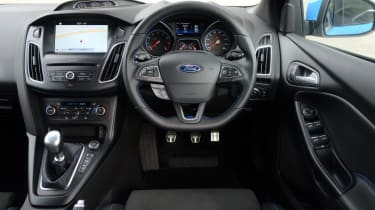 The extra torque gives the Focus strong in-gear performance, accelerating on test from 50 to 70mph in sixth in 4.6 seconds – 1.2 seconds faster than the Civic. In fifth, the same test took the Ford 3.7 seconds and the Honda 3.8 seconds, just a tenth behind. The Focus was much faster off the line, though, thanks to that four-wheel-drive grip.

Despite the RS’s speed, the Civic is the sweeter car to drive, with nicer steering and incredible grip in fast corners. The Ford’s six-speed manual box is also lighter and not quite as mechanically precise as the Honda’s. It’s this interaction with the car that defines the experience. There’s no doubting the Focus RS’s raw performance, but it doesn’t feel quite as natural as the Type R.

The clever Drift mode kicks the tail out into an arc in corners and gives the Ford an advantage over the Honda here, but it feels like it’s fighting what the car fundamentally wants to do. You’ll have to find yourself a track just to use it. 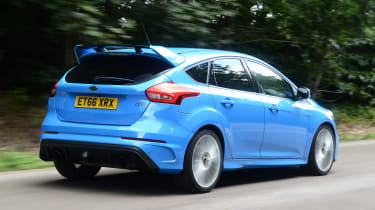 Still, the traction on offer is excellent, helping turn the car a little more from the rear and boosting agility. The RS is always raring to go. It’s firm in the standard mode, with hyper-alert steering, while initiating the RS mode for the dampers will have you pogoing up and down in your seat; the chassis is very firm. There is no doubt this hatch has the hot element covered, but it doesn’t have the breadth of ability of the Civic.

Testers’ notes: “The RS was developed with help from rally driver and YouTube sensation Ken Block. The Drift mode’s calibration means you can play rally driver – but not on the public road.”

The Focus RS is even more pumped up than its ST stablemate, with its huge grille and roof spoiler. But the Honda takes things to another level with its outlandish wheelarches, racy bodykit and massive wing. It makes the Ford look toned down when you put the two together like this.

Each of these hot hatches offers ballistic straight-line performance, but they’re also fantastic at scrubbing off speed. The Ford’s brakes are very strong and inspire confidence, but the Honda’s seem even sharper and the pedal gives plenty of feel. 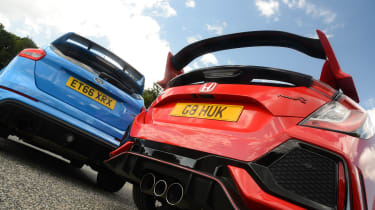 Both the RS (Rallye Sport) and Type R brands have heritage and loyal UK fans. Type Rs arrived in the nineties, and fast Fords have used the RS badge since the seventies. They now mark the top of each brand’s performance ranges. 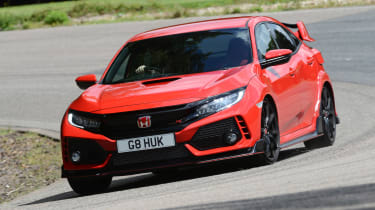 The Honda Civic Type R is the new hot-hatch king. A clever new chassis set-up means it’s more fun than ever without being too stiff for use on the road. Meanwhile, the strong in-gear performance feels more usable than before, and the car delivers sweet steering, slick shifts and incredible grip. It’s also really spacious and feels more up to date than the Focus RS. 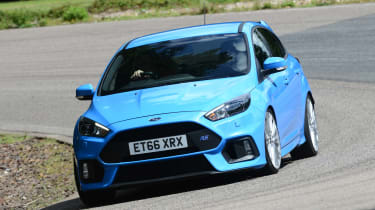 The 4WD Focus RS offers something a bit different from the Honda, so there’s no shame in coming second. It’s still a bargain considering the huge performance on offer, and it’s nearly as accomplished as the Civic in terms of handling. The Ford falls behind a little on ride and in-car tech, but you can’t go wrong with either of these amazing hot hatches. 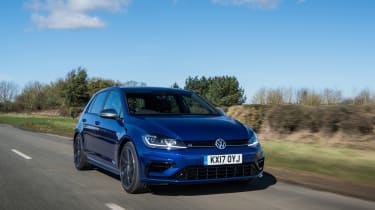 The VW Golf R is still one of our favourite hot hatches, and thanks to its powerful turbo and 4WD, it’s nearly as fun to drive as our rivals here. It’s also more practical than either and easier to live with – just not as exciting. 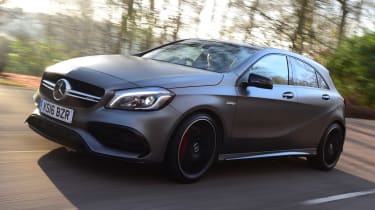 It has the same 2.0-litre four-cylinder and 4WD combination as the Focus and Golf, but the A 45 is much more powerful. Performance is incredible and the cabin feels upmarket, but it’s not as involving as its rivals and costs quite a bit more.