The Honda feels half-hearted. The weedy electric motor means the engine is used too often, and that ensures fuel economy is poor. The Toyota Prius is a more intelligent solution. 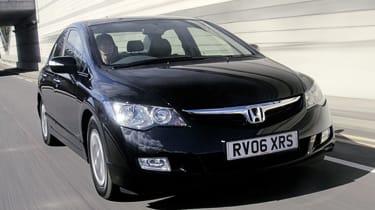 Driving: The IMA system employs an electric motor to boost the power of the petrol engine: maximum output is 113bhp, peak torque is 225Nm. But the electric motor is weak, and isn't meaty enough to shift the car from a standstill. So unlike the Toyota Prius, the Civic is seldom powered directly by the electric cells, undermining its clean credentials. Instead, the electric motor operates via the snatchy brakes; coast or come to a standstill and the engine stops, restarting as soon as you lift your foot. Fine - but most conventional engines are at their least efficient and most polluting when accelerating, and the Honda does nothing to address this. But it is smooth and simple to drive. Outright performance is OK, enough to easily keep pace with motorway traffic - although you have to put up with the engine whine, due to the CVT gearbox (it sounds like a slipping clutch). The Honda likes to use higher revs, though - and this, together with its inability to run properly on electric power, explains why it fell so far short of claimed economy figures in our hands. This is despite gearing that's as long as many diesels. The ride is poor too - the suspension is crashy in town, and too sudden and abrupt to be comfortable elsewhere. Stability and sharpness are good, but we'd trade those characteristics for more comfort.

Marketplace: No, your eyes aren't deceiving you; the Civic Hybrid doesn't have much in common with the European hatch we rate so highly. The four-door is designed for America, where hybrids are big business. And, since the US has conservative tastes, that's why this is neither a groundbreaking nor attractive piece of design. The Civic's most obvious rival is the Toyota Prius, but there are any number of diesel family hatchbacks that will, in real-world use, prove more fuel-efficient.

Owning: The interior of this toned down Civic saloon isn't anywhere near as stylish as that of the hatch. It does have an excellent driving position, supportive seats and decent space in the back, but also suffers from huge A-pillar blind spots and a boot that's short on floorspace. It lacks folding rear seats, too. Still, the cabin is easy to get on with - besides a small gauge on the dash, there's not much to set the Hybrid apart from a standard Civic. Except the price - at £17,000, this Honda is expensive compared to diesel alternatives. They include Honda's own diesel Civic, a car that proved more economical in our hands than the Hybrid. It returns just 38mpg, while the diesel averaged 44mpg. But official CO2 emissions are low, making the Civic an attractive buy for company car drivers. 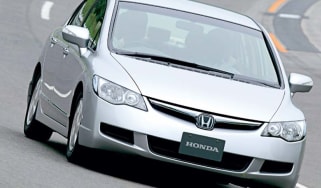 At last! Honda's charge for honours in the family car market has begun. The new Civic hits the road this week, spearheaded by an innovative hybrid - a…
Skip to HeaderSkip to Content