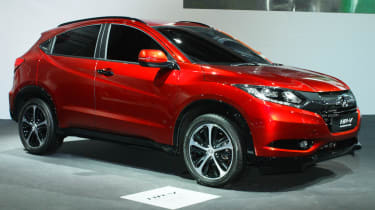 The Honda HR-V is back, as the brand confirms that its new Jazz-based SUV – due on sale in the UK next year – will use the badge last seen on a compact SUV in 2005. Auto Express was shown around the newcomer by stylist Masahide Kobayashi. We've now got the latest pictures straight from the Paris Motor Show, too.

We first saw this car back in January 2013 as the Urban SUV concept. Later in the year, Honda revealed a production version for the Japanese market, badged Vezel. But this is the first time we’ve seen the European-specification model in the flesh, and it’s marked out by a set of stylish dual-colour diamond-cut alloy wheels and contrasting gloss-black body cladding. What remains, though, is the HR-V’s upward-sweeping creases and hidden rear door handles, helping create a sporty coupe design.

Until the car’s official unveiling at the Paris expo, Honda’s keeping many details close to its chest, but it’s revealed that practicality is high on the agenda. To that end, the fuel tank is located centrally to avoid limiting boot space or pushing up the rear seats and impacting on headroom.

Honda Magic Seats allow the back row to be folded completely flat. What’s clear from seeing the HR-V in person is that it’s set to be one of the largest cars in its class, measuring 4,295mm in length. That’s 160mm longer than a Nissan Juke and a fraction longer than another of the sector’s bigger cars, the Vauxhall Mokka. Honda hasn’t released any pictures of the interior, but tells us there’ll be a focus on quality. 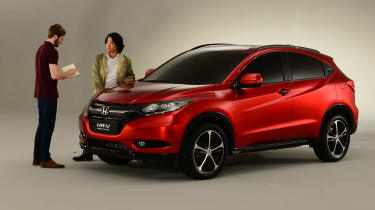 Not only will the HR-V sit on the platform of the next-generation Jazz, due at the end of this year, it’s also expected to share many of the same engines. However, insiders said there was the possibility of using motors not found in the Jazz line-up. Either way, the range should include a hybrid with 133bhp from a combination of 1.5-litre petrol engine and electric motor. A dual-clutch box, rather than the current Jazz’s flawed CVT, will be fitted.

We’re anticipating a diesel for the UK – possibly the Civic’s 1.6-litre i-DTEC – and a direct-injection 1.5-litre petrol is on the cards, too. All HR-Vs will be front-wheel drive at launch, but Honda does offer the Japanese-market Vezel with four-wheel drive, so UK buyers could be given the same option.

As well as the Juke, the HR-V aims to take on the Peugeot 2008 and Renault Captur, and will go on sale in summer 2015 in the UK. Slotting into Honda’s range between the Jazz and Civic-based CR-V, it should cost from around £16,000. 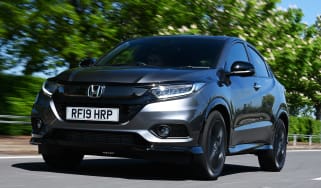