FIRST REPORT: We’re house hunting in our new hybrid… but will we be ‘sold’ on its talents? 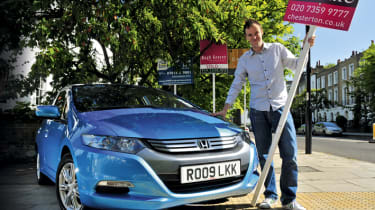 It started off as an exciting prospect, but has ended up as a real chore – I’m house hunting at the moment. And I’ve lost count of the weekends I’ve spent crawling around London looking for somewhere new to live. I must have seen at least 50 properties, with no success to date. Soul-destroying or what?

But there has been one bright spot in my fruitless search – I’ve taken the keys to our new Honda Insight, and it’s proving to be the perfect partner for long days spent in urban jams and manoeuvring around tight residential streets.

In simple terms, the Insight is Honda’s answer to the Toyota Prius. It’s a hybrid which cuts the power from the 87bhp petrol engine at low speeds or when stationary, reducing emissions. Energy captured during brake regeneration recharges the batteries for the 14bhp electric motor, meaning there’s no need to plug anything in to remain topped up.

As someone who ran a Prius for a number of months in 2004, it’s technology that I am accustomed to. Indeed, one of the questions I hope to answer during my time with the Insight is just how much it has moved the game on from the Toyota. So, watch this space!

Initial impressions have been largely favourable. Styling-wise, the Honda is cut from the same cloth as the Toyota, with a slippery shape designed to aid aerodynamics. It’s attracted a healthy number of stares already, possibly due to the limited number on the road – I haven’t seen any others at all yet! Or maybe it’s the appealing Cerulean Blue paint job, which certainly marks the Insight out from the swarms of bland, silver cars around these days.

Given that the Honda has spent so much time in city traffic to date, on account of my house search, the automatic gearbox has been a bit of a boon, too – the Insight couldn’t be easier to drive. The steering is well weighted and the car feels light and simple to control – parking in congested streets has been really straightforward.

The ride has been a bit of an eye-opener, though. With the newcomer aiming to deliver a more fun driving experience than the Prius, the suspension is firmer than I anticipated, and on more than one occasion I’ve felt the full force of the capital’s speed bumps jolting their way into the cabin.

The green machine hasn’t been restricted to travel around town, however. It also got the chance to stretch its legs on a sprint down to Portsmouth. To be honest, I did have reservations about how it might cope on the motorway, given that I was ferrying a couple of friends, plus some of their luggage. I was a little concerned that the 1.3-litre powerplant might not have enough punch to keep me happy. But my doubts were cast aside, and it happily gobbled up mile after mile with no problem whatsoever, although the engine was louder than I’d have liked.

Inside, the Honda ticks all the necessary boxes. The driving position is very accommodating – which, as a six-footer, is not always the case in cars on our fleet. The rear, too, is spacious enough to carry a couple of adults in comfort. And the stereo has that all-important Aux connection, which means I can listen to the tunes I want from my iPod – a real lifesaver when you’re stuck in traffic between house viewings!

Admittedly, it could all be a bit more stylish. There seems to be a lot of grey plastic. And there are a couple of gimmicky Eco Assist and Eco Guide displays, which I’ve not paid much attention to yet. I’ll let you know what I make of them in my next update, when hopefully I’ll be reporting on the Insight’s load-carrying, house-moving abilities, too...

On the face of it, the Insight looks to be a bargain. No other full-size hybrid can match it on price – a Toyota Prius is an extra £2,500. However, it’s clear where the savings have been made as soon as you clock the cheap cabin plastics. Other niggles include the CVT gearbox, which holds engine revs at an intrusive drone during acceleration. But look past these issues and the hi-tech Honda makes an interesting alternative to a traditional petrol or diesel-powered family hatch.