Despite a chilling reputation, there’s nothing to be afraid of on excellent-value hybrid. 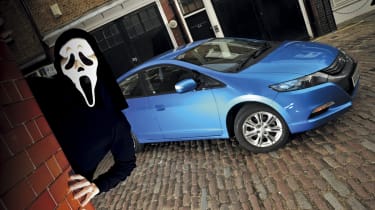 Hallowe'en may be a distant memory and it’s bit too early to be worrying about being spooked by the ghost of Christmas past.

But there’s been one horror story in 2009 that just won’t go away – and curiously, it involves the Honda Insight.

With cutting-edge petrol-electric technology, a price which significantly undercuts its key Toyota Prius rival and the reassurance of quality that the Honda badge normally brings, you’d have thought the Insight would be a nailed-on success.

Our own Mike Rutherford made his feelings clear in Issue 1,077, when he described it as “the ugliest car with the nastiest interior I’ve driven all year”.

The Auto Express road test team was similarly unimpressed in the Insight’s head-to-head with the Prius in Issue 1,071, bemoaning its “uninspiring” dynamics and “irritating” suspension.

So, is all this criticism justified? Is the Insight a model that will truly give you nightmares? After six months running it on our fleet, I have to say I’m perplexed as to why it’s attracted so much hostility and negativity.

Over nearly 4,500 miles with us, the Insight has demonstrated its worth as a reliable, cost-effective workhorse. And on a couple of occasions, it really has shone.

Most notable among its achievements was its performance in our mileage marathon in Issue 1,085, when our road testers drove a series of models from London to Tyneside and back to see if they could achieve the 60mpg fuel economy they were all claimed to deliver.

Now, you probably know as well as I do that while there’s justified scepticism over models’ official economy figures, hybrids in particular stand accused of falling well short of the mark.

But the Insight blew that myth to smithereens. Pressing the model’s ‘Economy’ button and careful application of the right foot saw it record 65.8mpg – that’s 1.6mpg more than even Honda says it’s capable of.

Only Peugeot’s tiny 107 managed better on our motorway marathon.

Allied to that fuel-sipping potential is the sort of practicality a city car can only dream of. This was clear during my protracted house move in the summer, when the Honda’s folding rear seats meant it was a breeze to shift loads of bulky boxes from my old flat to my new house. The underfloor storage in the boot also proved extremely useful.

Even better, as this move was from north to south London, it involved numerous trips through the central Congestion Charge zone – but the Insight’s hybrid status ensured I didn’t have to shell out £8 a day.

The Honda was then pressed into service as a family car, with the arrival of my baby daughter in August. Thankfully, the Isofix mounts meant fitting the superb MaxiCosi Cabriofix child seat was simple, while there’s more than enough space for the massive amount of gear my three-month-old requires on every trip.

Reliability, as you would expect of a Honda, has been first class. The only minor issue was the key fob failing to work on a couple of occasions, but both times it corrected itself with repeated presses.

Yes, the ride really is bad enough to have you waking up in a cold sweat, especially in the city, where the Honda approaches speed bumps with the same sort of enthusiasm a vampire has for garlic. That’s a shame, as the car should thrive in the urban environment, with its low emissions and financial incentives.

This problem aside, in no way does it deserve its frightful reputation. The only thing that’s scaring me is the prospect of my fuel and C-charge bills going through the roof now that it’s gone!

Graham's appreciation of the Honda is understandable. It’s a spacious family model that’s well equipped and economical. But the biggest saving the hybrid has made is the £8 daily Congestion Charge levied against cars that drive into central London every day. Petrol-electric vehicles like this sidestep the extra cost – so Graham is the perfect Insight owner.

Yet while the Honda is competitively priced, if you don’t drive into the capital every day, a conventional diesel hatch would provide decent fuel returns, plus more comfort and style.