Does raft of changes make hybrid a true rival to the Prius? 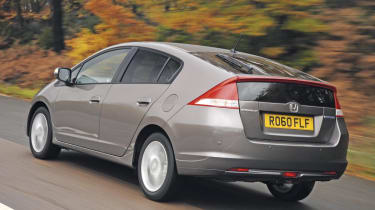 With Honda taking on board customer feedback, the Insight has a more comfortable ride and a classier feel to its interior. Yet it’s still not perfect – the limited refinement under heavy throttle inputs and poor body control, which hampers agility, hold it back. While the price – which undercuts the Toyota Prius by £3,940 – should make it a very attractive family car, the fact it’s not exempt from road tax or, from January, the Congestion Charge, makes the Insight’s case weaker still.

Thanks to a little Insight from customers, Honda has been hard at work tweaking its Toyota Prius-rivalling hybrid! Buyers criticised the ride and poor cabin quality – but with these issues addressed, can the car begin to shine?
The interior certainly looks better. On our Insight, it was finished in black, with chrome surrounds on the air vents and silver inserts in the door trims. Quality is noticeably improved, although some plastics still feel slightly scratchy and cheap.
As far as the ride is concerned, things have really improved. It’s still not perfect, but where the old model crashed over potholes, the updated car is far more adept at dealing with them. The softly sprung set-up doesn’t lend itself well to cornering, though, with the Insight leaning into bends. This was also a feature on the previous incarnation.

A few other niggles have been carried over, too. The CVT automatic transmission keeps the engine spinning at high revs when you floor the throttle, which really dents the otherwise good refinement. The speedometer is still inconveniently placed, with the top of the steering wheel often obscuring the readout.
Strong
No changes have been made to the powertrain, so you’ll find the same 88bhp 1.3-litre petrol engine mated to a 13bhp electric motor. That means 0-62mph still takes 12.5 seconds, and the top speed is 113mph. With strong low-down torque from the electric motor, the car feels quite sprightly around town.
Our experience of running a long-term Insight is that you’ll struggle to get anywhere near Honda’s claimed economy figure of 61.4mpg; expect to achieve 40-50mpg in regular driving.
The big problem is that the car still emits more than 100g/km – its 105g/km output means buyers have to pay £20 a year in road tax, unlike the Prius. Plus, from 4 January, they will also have to stump up for London’s Congestion Charge.
For many customers, that was a major reason for purchase.
The £16,325 starting price helps to compensate – it makes the Insight the cheapest hybrid on sale, at least until the petrol-electric Honda Jazz arrives in 2011. And our £17,905 mid-spec ES isn’t short on kit, with alloys, climate control and a USB connection all standard. Buyers can also opt for the new flagship EX, which has sat-nav and leather.
Rival: Toyota Prius
While the Prius is considerably more expensive than the Insight, it’s more advanced, offers much improved fuel economy and is exempt from road tax and Congestion Charge, thanks to its 89g/km CO2 emissions. For the time being, the Toyota is still the king of the hybrids.
Share this on TwitterShare this on FacebookEmail