You only get two engines to choose from, with no turbos or diesels. Unsurprisingly, performance isn't strong

When it first appeared, the current i10 impressed with its comfort, refinement and composed driving dynamics. And while newer rivals have moved the game on, the Hyundai isn’t that far behind.

And yet this little car is very pleasant to drive. It weighs only 933kg, so that 65bhp and 95Nm of torque is just enough to get you up to speed, and this is helped by a slick-shifting five-speed manual gearbox. We’d avoid the optional automatic transmission unless you’re absolutely desperate for the gears to shift themselves – it’s an old four-speed design and not the best around. 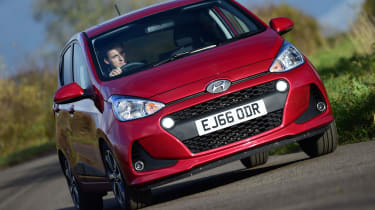 The Hyundai has decent driving dynamics: it handles quite tidily and the ride quality is fairly comfortable for such a small and light car. Plus, it doesn’t start to feel out of its depth when dicing with HGVs and SUVs on the motorway - wind and road noise are isolated well, although the VW-group trio of city cars are more refined still.

There’s also more wind and tyre roar than in city car rivals. It’s far from deafening, and the car is more than capable on the motorway, but rivals have the edge for cruising comfort. As with the Kia Picanto, the Hyundai i10 can’t match the VW Up for driver appeal. The i10 feels composed through a series of bends, with good grip and direct steering, but there’s little feedback via the light controls.

On the plus side, it’s easy to drive in town, while compact dimensions and good visibility make it easy to park. However, as with the Picanto, potholes and sharp ridges shudder through the structure, but in all other situations the i10 rides well.

Picking from the i10’s two engines is easy if you live in town – go for the small one. Even though the 1.0-litre has only 65bhp, it’s lively, quick to rev and emits a pleasant little three-cylinder thrum when you push it hard. It’s also fractionally lighter than the 1.2 (by 10kg), and it’s certainly more tax-efficient.

Out in the real world, the Hyundai feels lively enough around town and can just about keep up with fast-flowing traffic on open roads. The engine is quite smooth, if not as refined as similar three-cylinder units found in rivals. It also feels a little breathless when extended, which means shifting up early using the slick five-speed manual is the best bet.

Those who spend a lot of time on motorways may find the 1.2's extra torque and cruising refinement worth the loss of fuel economy and character, but the 1.0-litre isn't totally out of its depth at speed. The 1.2 still isn't anything approaching fast, either.