With good economy and low overall running costs, the Hyundai i10 makes sense as a frugal city car. 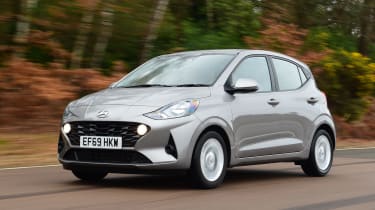 We’ve established that the i10 isn’t going to set any land speed records, but what’s more important is its ability to deliver great efficiency, leading to low running costs.

The i10 is more expensive to buy than ever before, with the range now starting at almost £13,000, and it’s important to remember you’ll also lose a fair chunk of that list price over an average three-year ownership stretch.

Fortunately, the small-capacity petrol engines that power the i10 return decent fuel economy and relatively low CO2 emissions. The base 1.0-litre unit with 66bhp achieves a claimed 56.5mpg on the combined cycle and emits 114g/km of CO2 in SE trim. 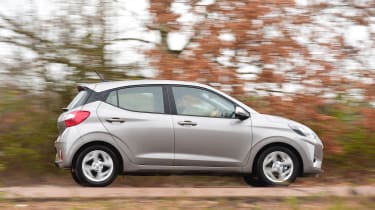 The i10 should be pretty cheap to insure, as the entry-level 66bhp 1.0-litre car sits in group 4. Premiums for the top-spec 99bhp 1.0 T-GDI N Line version should also be relatively inexpensive as it’s in group 10.

In comparison, the Kia Picanto range starts from group 5 and tops-out at group 11, while the Toyota Aygo is in groups 8 to 9.

Increased prices and a refresh of the lineup haven’t managed to buoy the i10’s used values. Data suggests that Hyundai’s city car will hold onto an average of just 36% of its original list price over three-years and 36,000-miles. Its Korean counterpart, the Kia Picanto, performs significantly better in this regard, retaining an average of 46% over the same ownership period.