Considering it has such small, compact dimensions, the Hyundai i10 is a really spacious and practical car inside

All versions of the Hyundai i10 come with rake movement on the steering wheel. It doesn’t adjust for reach, but this combines with the seat height adjustment on SE models upwards to allow drivers to get comfortable easily. The five-door bodystyle also makes access to the rear a breeze, while the three seatbelts in the back mean the car is a genuine five-seater (the Blue Drive is only a four-seater to help reduce emissions). And considering the price, you’ll be reasonably comfortable wherever you’re sitting in the car. 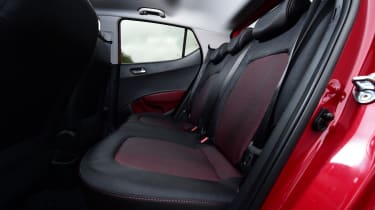 The front seats of the i10 pull off a neat trick. Usually in a small, tall car like this, extra space in the cabin is found by mounting the front seats tall and upright, and in some models this can make the driver feel as if they’re perched on rather than in their seat.

But that’s not the case in the Hyundai, which manages to provide a driving position that feels natural and comfortable. If you’re going to choose a small car for a long journey, it’s going to be this, a Volkswagen up! or a Skoda Citigo, at least in the comfort stakes.

That tall roof means headroom is simply not going to be a problem, and while knee room in the back isn’t exactly cavernous, you’ll be fine unless you’ve promised the local basketball team a lift.

There’s a choice to make between space and space-saver when you’re buying a Hyundai i10. If you think you can do without the spare tyre in the boot, then the load bay has a capacity of up to 252 litres with the rear seats in place. That’s one of the biggest in the city car market, and bigger than some cars in the next class up. Fold the back seats and the space expands to a small delivery van-like 1,046 litres. 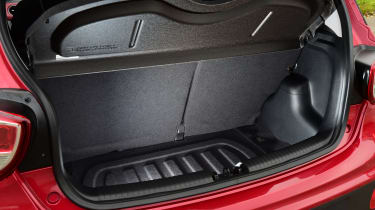 However, if you specify a spare wheel in the showroom – or buy an i10 SE, which comes with the spare as standard – then boot space shrinks to a significantly less useful 218 litres. The maximum capacity is also reduced, although it’s still decent, at 1,012 litres.