The i10 scores big inside, as its cabin is as good as you'll find in cars several classes up

The Hyundai i10 is a classy and smart supermini on the outside. It lacks the personality of a Renault Twingo or even the VW up!, though, so if it's fun you're after look elsewhere. For 2016, Hyundai added new LED running lights, revised bumpers and tweaked rear lights to sharpen the look slightly - yet the effect is subtle.

Industry rumour has it that when Hyundai took the wraps off the latest i10 for the first time at the Frankfurt Motor Show back in 2013, a senior Volkswagen executive has overheard saying that he couldn’t understand how his company wasn’t able to make a small car cabin that was as classy.

He had a point – the i10’s dash is made of very high-grade materials, and the dials and instruments are just as upmarket. Plus, even the affordable, entry-level i10 S version comes with a decent level of equipment as standard. This includes electric front windows, an MP3-compatible stereo with USB and aux-in connections, as well as a full suite of electronic safety aids. 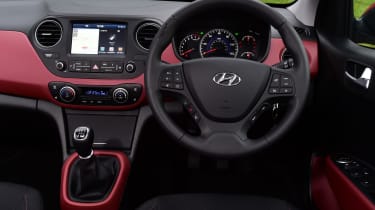 This SE spec brings air conditioning, body-coloured mirrors and door handles, a light in the boot and a height-adjustable driver's seat, as well as cruise control, electric rear windows and a space-saver tyre.

Premium and Premium SE models come loaded with kit to justify the extra outlay, and from 2016 features like a heated steering wheel are offered on the Premium SE.

While the standard i10 interior is a little drab, with lots of grey plastic on show, buyers can add blue or red interior trim at no extra cost to brighten up the interior.

The Hyundai’s infotainment system is fairly basic. A small LCD screen is flanked by hot keys and rotary dials that control the major functions, which include Bluetooth hands-free phone connection and wireless music streaming. There’s also a USB port that allows you to charge your smartphone and play tunes stored on an external media device. Also included is DAB radio alongside the usual AM and FM functions, plus a single-slot CD player. All versions get four speakers, apart from the S, which has to make do with two.

Most of the unit’s features can be controlled via the multifunction steering wheel, including answering and ending phone calls. Better still, connecting your smartphone is fairly straightforward and the sound quality when used is good. If you want a more advanced set-up, then you’ll have to upgrade to the SE Premium, which gets a seven-inch touchscreen that includes sat-nav, Apple CarPlay and Android Auto.