The Hyundai i20's mid-life spruce-up adds a modern gearbox, infotainment and safety tech, but how does it drive? 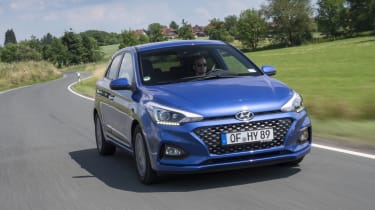 The Hyundai i20 has always been a capable supermini with few glaring faults, and the mid-life updates, although modest, are welcome. The new automatic gearbox is great for city driving, and the inclusion of Android Auto and Apple CarPlay on every model is arguably the most useful change of all. A strong warranty makes it a sensible buy, but in such a hugely competitive class the i20 still struggles to stand out.

This is the revised-for-2018 Hyundai i20. It’s been around in its current iteration since 2014, but a mid-life refresh has introduced a few improvements. It's an important car for the brand, and only the Tucson SUV sells in bigger numbers. So what’s new?

From a styling point of view, nothing radical. Hyundai’s signature ‘cascading’ front grille takes the place of the similarly-shaped old one, while the bumper is subtly revised to boost aerodynamic efficiency. Around the back there’s a new rear bumper as a result of the number plate migrating upwards onto the boot lid, and the tail light graphics have changed.

There’s three new exterior colours to choose from, two new alloy wheel designs and, later in the year, the option of a contrasting black roof. 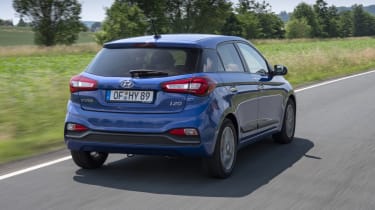 Save for some new seat fabric and a panoamic glass roof for top-spec Premium SE Nav models, little has changed inside. It’s a dowdy cabin, but on the plus side it’s logically laid out, well built, and one of the most spacious in its class.

The most welcome introductions inside are the addition of both air conditioning and a seven-inch touchscreen on the basic S trim. Though lacking sat-nav (it’s standard on Premium Nav and above) every i20 now gets Android Auto and Apple CarPlay, allowing easy access to third party mapping via your chosen smart phone.

Hyundai’s infotainment setup is one of the better systems in the segment, however - not as slick or pretty the Volkswagen Polo’s, but clear graphics and a mix of simple menus and physical shortcut buttons make it a doddle to use.

Mechanically, the most significant change is the addition of a dual-clutch automatic gearbox. It’s largely the same unit that sees service in the larger Ioniq hybrid, and overall it shifts smoothly without any sign of jerking at parking speeds. It’s by no means perfect - it can be hesitant to kick down at times - but if you want or need a supermini with an auto gearbox it’s more than good enough.

The manual options include a six speed manual in top spec petrols and five-speeders for the rest. Both have a similar shift quality: precise enough, but with a slightly sharp clutch engagement which makes driving smoothly in traffic more concentrated effort than in VW-group alternatives.

The auto comes to the UK paired with a 99bhp 1.0-litre turbo. The lively, frugal three-cylinder unit is carried over from the outgoing car, but gets a particulate filter and stop/start tech - the latter now standard on all i20s. The 1.0-litre is also offered with 118bhp, but the perfromance gains are negligible because their power and torque curves are identical up to 4,500rpm. 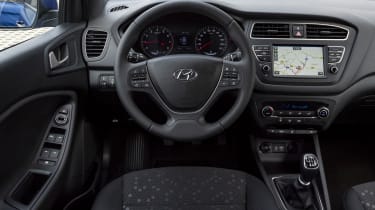 The 1.2-litre non-turbo remains as the i20's entry-level engine. It's smoother than the triple, though the lower-powered 74bhp variant is a little weak. There’s no diesel option anymore, as Hyundai quietly dropped it from the range a few months before the facelift.

The i20 rides and handles much like it did previously. In other words, it's comfy but not quite a match for the Polo, while offering decent composure without the fun of a Ford Fiesta. Revised steering is said to reduce vagueness just off centre, and the rack has more damping to reduce kickback. But in reality, that means there’s even less feel than there was before.

The addition of lane departure warning, lane keep assist and autonomous emergency braking are standard on all but the basic S. All cars get a five-year warranty, though this doesn’t match the seven years offered with its Kia cousin, the Rio. Hyundai’s unlimited mileage agreement beats Kia’s 100,000-mile limit, however.